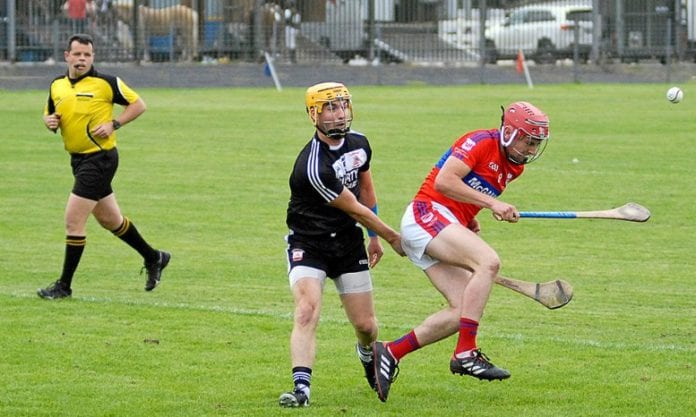 Padraig Pearses stormed back into contention in Duggan Park on Saturday (1st September) as this victory in the 2018 senior hurling championship put them into the top three.

Goals from Sean Hardiman and Gareth Lally were the telling factor for Shane Cusack’s men but it was their work rate over the hour that delivered this result and made other teams sit up and take notice.

The primary difference between the two sides was Pearses’ discipline in the tackle.  They never allowed Abbeyknockmoy settle in defence and they quickly moved the ball the other end to ensure the scoreboard matched their endeavour.

John Culkin’s side started the championship brightly with draws against Moycullen and Tynagh-Abbey-Duniry but they’ll need to reassess their standings after this deflating loss.  They just couldn’t come to terms with the tempo being set and carelessly presented Padraig Pearses chances.

Hardiman’s goal came after just three minutes when Shane Raftery’s delivery was assisted by Emmet Ward allowing Hardiman find the net.  And the Gurteen/Ballymacward team were 1-10 to 0-4 up at half-time.

Conor Fahey was tremendous around the middle and struck three excellent points from play while Tomas Flannery, Jimmy Gelston, Ward and Lally also found the target.

Abbeyknockmoy were depending on Paul Flaherty for their points but did have contributions form Trevor Mullins and Jason Joyce in the second half.  But despite forcing keeper Fearghal Flannery and defender Richie Lally into three crucial stops, they never threatened their opponents’ supremacy.

Kerrill Hardiman, Ward and Tomas Flannery stretched the margin before Ronan Bellew, just introduced, sent a ball into the square and Gareth Lally prodded it to the net to leave it 2-14 to 0-7 on 42 minutes.

Bellew would finish with two points while Gelston, Sean Hardiman and Tomas Flannery all added to their accounts.

This victory puts Padraig Pearses in second spot behind Tynagh-Abbey/Duniry who were comprehensive 4-21 to 0-13 winners over Moycullen in Pearse Stadium on Saturday.  And Ardrahan got their first 2018 win on Sunday (2nd September) with a 0-16 to 0-11 victory over Athenry in Gort.