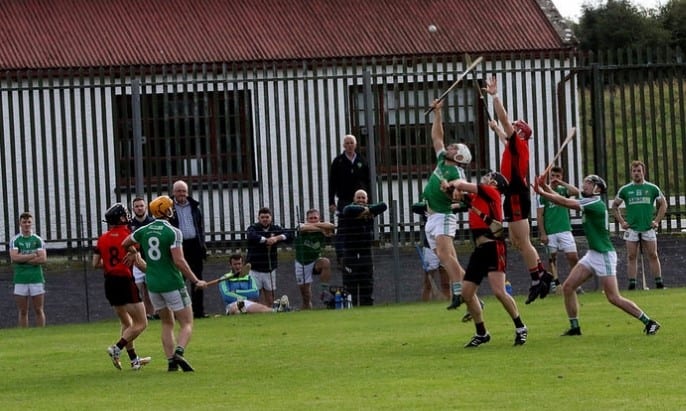 With five points from three games, the two most recent winners of the Tom Callanan Cup will compete in the knock out stages though they won’t be resting on their laurels as a top two place gains access directly into the quarter-finals proper.

Liam Mellows’ 100% record ended in Duggan Park on Sunday (2nd September) as they played out a shoot-out with unbeaten Tommy Larkins.  Adrian Morrissey and Jason Flynn shared 28 points from their respective teams’ totals in a 0-19 apiece draw.

It’s hard to know who’d be the happier with that result as both teams had chances to take the spoils but I expected Liam Mellows to seize the initiative with the wind after the restart as they only trailed 0-12 to 0-9 at half-time.

Tommy Larkins’ lead came from a quick blitz from Flynn, Conor Gardiner and Kevin McHugo but while Louis Mulqueen’s team did get back on terms (and briefly led), other teams will have noted their inability to close this out.

That being said, while Larkins are unbeaten, they have yet to win and will be without Conor Gardiner, who received a straight red card, for their showdown against Kilnadeema/Leitrim as they seek the one victory that will ensure their passage to the next round.

And despite that loss, they’ll be strongly fancied to advance as Kilnadeema/Leitrim were very poor against Castlegar.  Nobody wants to be twisting the knife at their misfortune but they handed the game to their opponents much too easily.

Yes, they were only promoted last year and they were missing approximately six of their starting team through injuries/emigration etc. but the talent they’ve been churning out should have made more of a match from this.

It will be a learning curve for them and they could bite back but as they need a win to have any chance of avoiding relegation.  But they can’t afford a performance like that again!

Of course, we may be slightly unfair to Castlegar who dictated terms from the off and finally secured their first win.  Murt Connolly’s team were impressive and relentless and didn’t ease up on the pedal but their year is going to be defined by the next two games against Craughwell and Tommy Larkins.

Those games will be the defining ones remaining with only two slots for the three teams to contest.