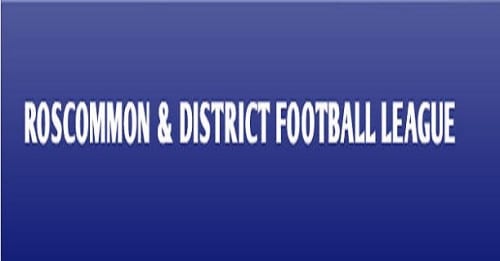 The opening round draws of the Roscommon and District League Division One and Two Cups have been made with seven Galway teams knowing their opponents.

In the quarter-finals of the First Division Cup, last year’s semi-finalists Kilkerrin United were paired at home against Ahascragh United in an all-Galway tie.

Ballinasloe Town B were also in the final four in 2017 and could be the semi-final opponents for Kilkerrin or Ahascragh on the same side of the draw.  First, they’ll travel to CP Ajax in Ballinphuill in their attempts to reach the final four again.

Dunmore Town will also have a quarter-final home when they entertain last year’s Division Two winners Strokestown United while the winners will meet Hodson Bay Athletic or Lough Harps who’ll meet in Athlone.

Ten teams will compete in the Second Division Cup with Shiven Rovers getting a bye in the quarter-finals.

Their opening assignment will be away to Roscommon United but should they prevail, they could meet Galway opposition in the semi-finals.

Moylough 79 are in the same half of the draw and start with a home encounter against Skyvalley Rovers B in the preliminary round.  A trip to Boyle Celtic B is the prize on offer in the next round.

Glen Celtic are also in action as they head to Cloonfad United B as they attempt to book a place in the final eight.  A home tie verses Rahara Rovers will the reward if the Glenamaddy based outfit are successful.

No dates have been announced yet for the six ties but they are expected to be played in April.