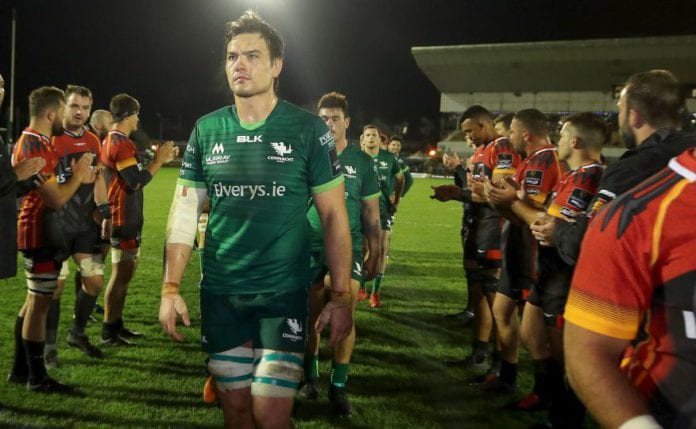 Quinn Roux will be captaining Connacht this evening as they clash with Munster in what will be his 100th appearance for the province.

Connacht and Munster will face off at the Sportsground at 5:15pm this evening, with just a single point separating the two sides in Conference B of Guinness Pro14.

Connacht also go into the game boosted by the news that Tiernan O’Halloran has returned from injury and will start at full back. He is part of a back three with John Porch and Kyle Godwin on the wings.

In midfield Tom Daly will be joining Bundee Aki, while Conor Fitzgerald and Caolin Blade will be partnering on the half back line.

In the back row Eoghan Masterson and Paul Boyle are at blindside and openside respectively, and they’re joined by Eoin McKeon.

Commenting ahead of the game, Connacht Head Coach Andy Friend said: “Saturday is another big occasion in the Sportsground.

“All players want to be involved in these interpro games and with Munster in our conference it takes on extra significance,” Friend said.

“We take pride in our home record and last season Munster were one of the few teams to beat us in the Sportsground so we know the challenge we will face”.

“It will be a proud day for Quinn Roux and his family. Making 100 appearances for Connacht is a great achievement and it is fitting that with Jarrad out, Quinn will captain the side.”

“He has been a real leader for us this season and has been driving standards among the player group”.