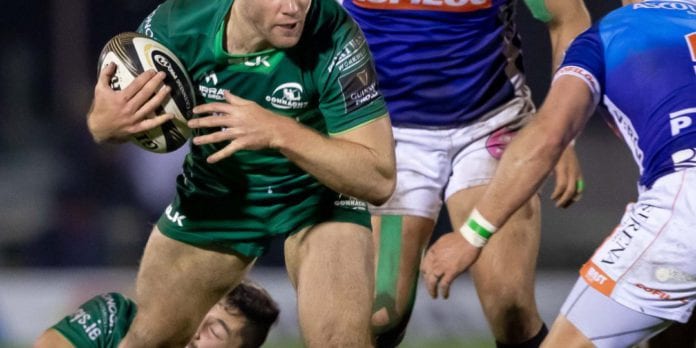 Connacht Head Coach Andy Friend has made three changes to the starting lineup for their first home game against Benetton this weekend.

The Italian team are coming to Galway this Saturday where they will face off against Connacht at the Sportground with kickoff at 7:35pm.

Darragh Leader, Peter Robb and Paul Boyle all come into the side as Connacht hope to bounce back from a defeat away to Scarlets on the opening day of the Guinness PRO14 season.

Leader is taking up number three again, joining Matt Healy and Tiernan O’Halloran on the back line, while Robb will be up with Kyle Godwin at midfield.

Conor Fitzgerald and Caolin Blade will continue their half-back partnership with Kieran Marmion named among the replacements.

Paul Boyle is joining the forward at number 8 with Captain Jarrad Butler named at openside and Eoghan Masterson at blindside.

Masterson’s brother Sean is named among the replacements, with the 21 year old Academy player set for his senior debut having impressed for the Connacht Eagles in their five wins so far in the Celtic Cup.

Speaking ahead of the game against Benetton, Andy Friend said: “While we were disappointed with the result last weekend, there is huge anticipation among the squad for our first home game of the season.”

“We have set some really ambitious targets for the season ahead, particularly around our home form.”

Friend added that there is always incredible support from the crowd when Connacht play at home, and he’s counting on that staying true tomorrow.

“A packed Sportsground is a very difficult place for away teams to come and I expect a great atmosphere when we face Benetton on Saturday evening”.

Commenting on the changes he said that some of it is due to injuries picked up since the last match, and he is also taking advantage of the depth the Connacht squad has.

“We are prepared for a long season where we will need a large squad of players to compete in the Pro14 and European competitions.”

“This week we have named Sean Masterson among the replacements. He is an excellent young back row who has impressed already for the Connacht Eagles side. I’m confident that he is ready for that step up to Pro14 rugby this weekend”.