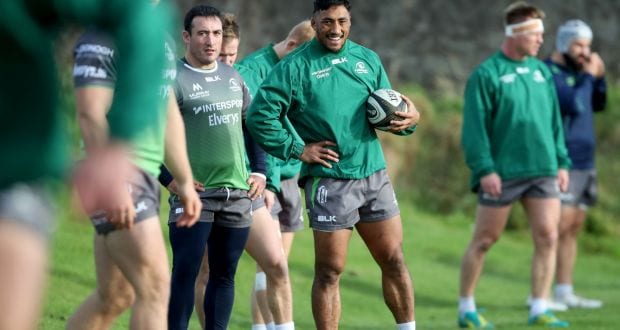 Ireland international scrum half Kieran Marmion has returned to the Connacht side to face the Ospreys on Friday (26th October). His return sees him renew his half back partnership with Jack Carty who is back in the starting team after being rested for the trip to Sale last weekend.

Marmion was one of four Connacht players selected on Joe Schmidt’s Ireland squad on Wednesday (24th October) along with Bundee Aki, Finlay Bealham and Quinn Roux.  And all four will start in Wales.

Aki returns to the midfield alongside Tom Farrell. They are part of a back line that includes Tiernan O’Halloran at full back and Niyi Adeolokun and Cian Kelleher on the wings.

In the forwards, Bealham starts at tight head. He is joined in the front row by loose head Denis Buckley and hooker Tom McCartney. Behind them in the scrum will be Roux and Ultan Dillane.

Sean O’Brien returns from injury and is named in the back row with captain Jarrad Butler at openside and 21-year-old Paul Boyle at number 8.

Here is your Connacht side to face @ospreys tomorrow in the #GuinnessPRO14!

“We have a few of our more experienced players coming back into the side which is a big boost to the squad,” said Connacht Head Coach Andy Friend upon announcing the team.  “Caolin Blade has done really well for us over the past few games, but it is great to have Kieran (Marmion) back as well.

“He is a really important player for us and he is fit and rearing to go. We also have Bundee back in our midfield alongside Tom Farrell. So overall, we are strengthened by our returning players for what we expect to be a tough fixture.

“Ospreys are going really well in our conference with four wins from their opening six games. The fact that they are hosting the game in Bridgend, means that it will be a really unique fixture. A few of our squad have played there before so some guys will be familiar with the ground.

“It will be a great atmosphere and we are really looking forward to the challenge.”