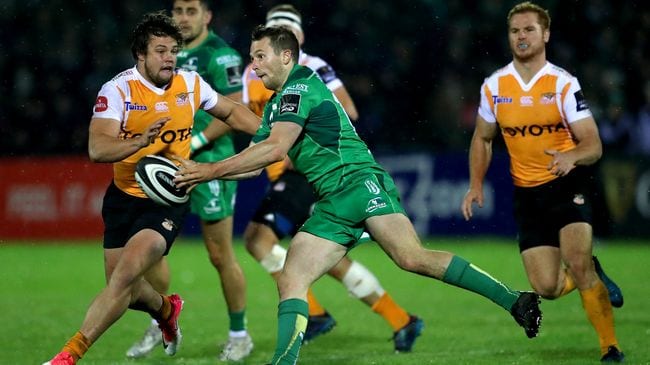 Connacht suffered a heartbreaking defeat in the Guinness PRO 14 on Saturday evening as Toyota Cheetahs came back from nine points down for victory in Bloemfontein.

Niel Morais took advantage of Connacht collapsing the maul in the final minute to secure a win for the hosts just when the visitors were set for a win that would put them back in championship contention.

Cheetahs attacked from the start and led 10-0 in as many minutes.  Uzair Cassiem finished a move that went through the phases from the scrum to get over the line in four minutes.  Morais converted and six minutes later, he added a 44-metre penalty to put the South Africans clear.

However, Kieran Keane’s side got back in the match and only trailed by one at half-time.  Pita Ahki, Caolin Blade and Tiernan O’Halloran were involved before Matt Healy got in on the left for his 23rd Connacht try.

Jack Carty added the two points leaving a penalty between them but Morais was on target again on 18 minutes to make it 13-7.

Connacht were taking advantage of their opportunities while Cheetahs starting going for the line rather than scores as they sensed a bonus point chance.  But when Healy took O’Halloran’s for another try on 21 minutes, the visitors trailed by just one.

ACTION REPLAY | Matt Healy gets over for his and Connacht's second try of the evening. Its 16 -15 to Cheetahs at the break #CHEvCON pic.twitter.com/BIUOxyPPhp

Morais kicked three points for the Cheetahs but just before half-time, Connacht punished Cheetahs for infringing the ruck and Carty split the posts from half way to leave it 16-15 at the break.

And within three minutes of the restart, Connacht led for the first time.  They attacked from a line-out eventually forcing Cheetahs to foul.  Carty found the posts and Connacht led 18-16.

It was end-to-end stuff as both teams battled for supremacy.  Cheetahs looked in control but couldn’t find a way through despite some strong runs.  Just before the hour mark, Connacht got in for what looked the winning score.

After 10 phases, Carty picked out Eoin Griffin who cracked the opposing defence for their third try.  Carty added the conversion and the Irish province were 25-16 clear.

However, they needed to consolidate their lead but Cheetahs got back for another try two minutes later with substitute Rabs Maxwano getting their second try.  Morais made it count and we were set up for a nail biting finish.

Even with the game played at altitude, Connacht were holding on but they provided the scoring chance in the final minute, Morais didn’t refuse and Cheetahs scraped home with a one-point victory.

It went down to the wire, the Cheetahs take the win 26-25 over Connacht, which leaves the table looking like

Cheetahs take the gap back to 10 but with connacht only picking up th BP we have a big chance to build a gap!#CHEvCON

It’s a blow for Connacht as victory would have put them back in the Champions Cup qualification race.  They now sit four points behind Cardiff Blues but the Welsh team have a game in hand.

Connacht’s next game is at home to Edinburgh on Friday, March 23rd.