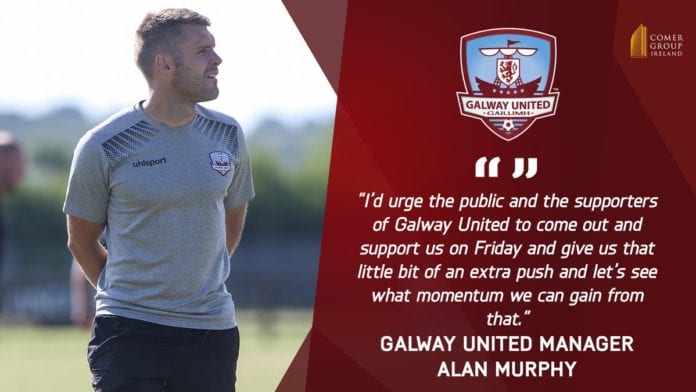 There will be a feel-good factor in Eamonn Deacy Park tonight (Friday, 6th July) as playing legend and goal scoring record holder Alan Murphy takes the reigns of Galway United for the first time.

The Tribesmen are 3/19 favourites to end a six-game winless streak and put Athlone Town to the sword.  They began the 2018 First Division season with a 4-1 drubbing of the Midlanders before travelling in May and coming home with a 3-0 win.

The groundstaff have Eamonn Deacy Park in tremendous condition ahead of tonight's game against Athlone Town. What a surface! 😍

It's a perfect evening and Alan Murphy takes charge of United for the first time – so let's get behind #GUFC tonight! Kick-off: 7.45pm. pic.twitter.com/uOxUeMDxTD

After getting nearly 1,200 supporters for that opening contest in February, the attendances have dropped since with the maroon and white attracting an average of 871, nearly 500 down on 2017 when they competed in the Premier Division.

However, that sub 1,000 figure still sees them sitting 10th out of the 20 Airtricity League clubs and their stakeholders, including the new Saudi owners, will be seeking a swift return to the top flight.

Galway United should never have been in this situation (sitting in sixth) and while likeable, Shane Keegan’s exit eventually proved inevitable after they failed to breach the Wexford FC rearguard in June.

And with leaders UCD 12 points ahead of United, an automatic promotion to join Cork City, Dundalk et al has sailed and they will now depend on reaching the play-offs.

The good news is Galway United are only six points behind leaders Longford Town to get to fourth spot.  The problem is closing that six-point gap with games running out.

With Longford Town sitting on 32 points from 18 games and many other contenders snapping at those coveted spots, it’s likely 50 points could be the minimum requirement for a ‘Top Four’ place.

Galway United currently have 26 points from 18 games.  With nine left to play, they may need eight wins to save their season and, possibly, keep Murphy in the job for 2019.

Treating the 2018 SSE Airtricity League First Division as three periods of nine games each, Galway United simply have to win the final section.  Even if the play-off series doesn’t eventually lead to promotion, it will give the club, and new owners, confidence that Murphy is their guy.

Galway United are away to Wexford’s North End United in the FAI Cup second round in August.  But every game they play over the next three months will feel like a cup match.

Murphy has been successful in his tenure as under 17 coach and will bring that to the senior job.  If he can get the right results, he could lead Galway United into a successful future.  But first he needs to buy time and that starts with three points against Athlone Town tonight.