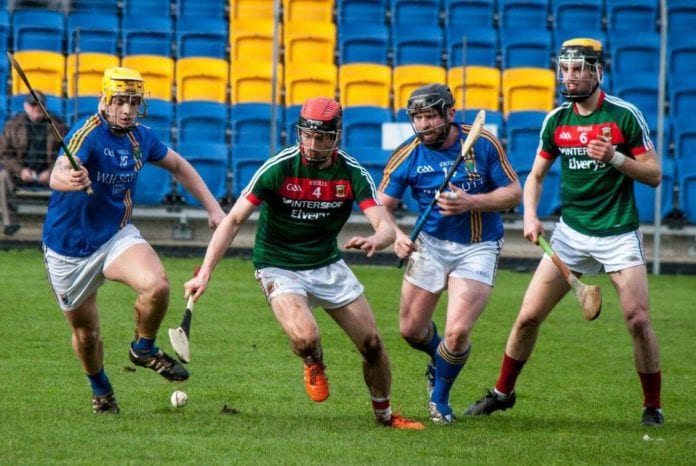 With the big match in Castlebar dominating national attention and Galway’s All-Ireland hurling title defence beginning in Tullamore, a gem of a contest could be overlooked when Mayo’s senior hurlers begin their attempts at a league and championship double.

Despite being a ‘football mad’ county, it’s been a 2018 to cherish for those involving with the small ball as Mayo were crowned National League Division 2B champions and begin their first of three group games in Aughrim against a side with similar ambitions.

Wicklow have made huge strides under former Wexford boss Seamus Murphy and reached the semi-finals in 2017.  Their target will be a final in Croke Park and, even though two qualify from a group of four, will know the importance of this fixture.

Our Senior Hurlers commence the Christy Ring Cup Championship under its new format on Saturday away to Wicklow.
If this year league game is anything to go by, it’s going to be a great battle from start to finish.
All takes place in Aughrim, Co. Wicklow Saturday 12th May at 3pm! pic.twitter.com/23Ywee0Mt3

Kildare and Roscommon are the other teams competing for two spots at the penultimate stage and with the Lilywhites favoured by many for national success, this could be a play-off for a final four place.

The two teams served up a cracker in February when the hosts came out 1-22 to 2-16 winners in Ballina.  Brian Morley got Mayo’s goal, Kenny Freaney contributed 10 points and their full forward was Keith Higgins.

However, Higgins doesn’t look like being involved which will be a critical blow to Derek Walsh’s side.  He returned to football training after their hurling league final win over Down and has been named in the team for the Connacht football championship clash with Galway on Sunday.

But Mayo still possess a strong team including Freaney and Morley in attack.  Sean Regan will be their go-to man in midfield with Tooreen half backs Michael Morley, David Kenny and Cathal Freeman instrumental.

Andy O’Brien is Wicklow’s key scorer and he got nine points in the league meeting against Mayo.  And Murphy has introduced two names that will have a major effect.  Bray’s Mikey Lee returns to the squad after moving to Tipperary.  And former Wexford star PJ Nolan is involved for this season.

It’s just a pity support for either county probably won’t be strong.  Wicklow only had 15 supporters at a recent meet and greet.  And while there should be a significant improvement, only four travelled to watch Mayo in 2014 when they prevailed over the Garden County.

But after Tooreen winning the Connacht championship, a year after Ballyhaunis were denied in extra-time, hopes are high another western county is starting to rise.  The ‘expected’ loss of Higgins and an away trip might just go against them.  But those that do travel could get their money’s worth.