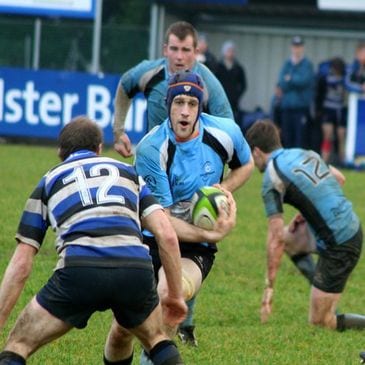 Corinthians took the spoils in the New Year’s Galway derby as they moved to seventh in Division 2A on the Ulster Bank Rugby League on Friday (5th January) evening in Corinthian Park.

Tries for Sean Horan, Dave McDermott and Sean Masterson gave Corinthians their first win in two months as they leapfrogged Greystones and Blackrock to mid table.

This was an eagerly awaited contest after the teams drew 7-7 in November and it followed a similar path in a scoreless opening period.

Mark McDermott put the hosts ahead before opposing out half Morgan Codyre equalised to leave it three points apiece.

A crucial moment arrived on 35 minutes when Galwegians’ number eight Jack Winters was sin binned following a high tackle and Corinthians took advantage before the break.

Scrum half Sean Horan cut through the defensive line to land under the posts for the first try and McDermott made no mistake from the resulting conversion giving Corinthians a 10-3 interval lead.

They added the second try after the restart as Dave McDermott profited from a long forward kick to get over the line.

Mark McDermott kicked his second conversion making it 17-3.  But on 54 minutes, Galwegians were back in the contest when forward dominance led to Dave Clarke landing a try leaving the deficit at just nine points.

But Corinthians kept their composure to hold Galwegians out and were rewarded eight minutes into injury time when Sean Masterson got their third try but the result was already guaranteed.

Neither team are in action again until January 27th.  Corinthians will make the trip to Blackrock where a result will put them in pole position to secure their Division 2A status.

Galwegians welcome high flying Nenagh Ormond to Crowley Park on the same day as they struggle to salvage their season.  The Tipperary outfit won a cracking local derby also on Friday evening as tries for Johnny Hayes, Jamie McGarry and Kevin O’Gorman gave them a 30-29 win over Cashel RFC.

Briain Kelly - June 30, 2022 0
The award-winning Blue Teapot Theatre Company makes a welcome return to the stage this September with the world premiere of ‘Into The Dark Woods’ at...