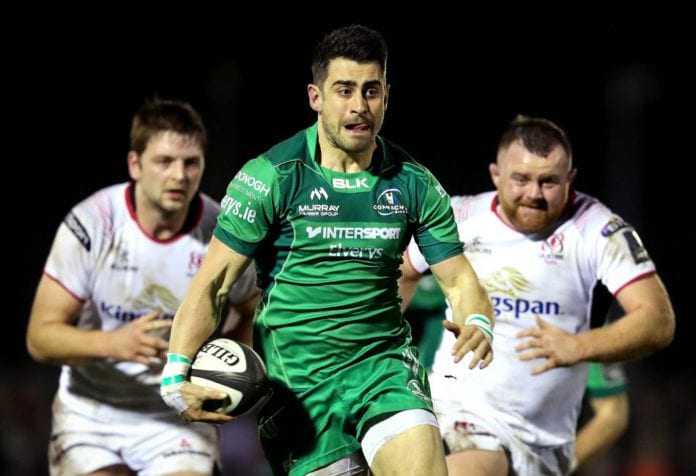 After a superb conclusion to 2017, Connacht will be hoping to begin the New Year in similar fashion when they play Leinster in the RDS.

Their 44-16 thumping of Ulster was a massive result including six tries but the stakes will rise against Leo Cullen’s team who have lost just twice this season.

Indeed, Leinster are chasing their sixth consecutive win in all competitions after their 34-24 victory over Munster on St. Stephen’s Day and are sitting comfortably in second place of Conference B.

The home team’s record against Monday’s opponents is spotless.  Connacht have not won in the RDS and have to go back to September 2002 in Donnybrook for a competitive away win.  They won that day 26-23 but their most memorable recent success was the 20-10 PRO12 Final win in Murrayfield in 2016.

Tiernan O’Halloran, Matt Healy and Niyi Adeolkun were the try scorers on that historic Edinburgh afternoon and all are involved again though Adeolkun doesn’t start.  Cian Kelleher, Tom McCartney and James Cannon are the three changes from Ulster as Kieran Keane looks to maintain a settled side.

In contrast, Cullen makes 13 changes from the Munster tie with only Dan Leavy and James Lowe holding their positions but that overhaul shouldn’t be taken as any form of complacency.

Leinster came from 14 points down to beat Exeter 22-17 in their last European Champions Cup outing keeping them in pole position for quarter-final qualification and seven of that team will start against Connacht.

Strong team announced for the trip to the RDS. Hopefully @connachtrugby can build after a great performance Vs Ulster before Christmas, which will be needed as Leinster have named a strong team. Well they always name a strong team their strength in depth is unreal 😅 #LEIvCON pic.twitter.com/WXabic3wyZ

The most noteworthy is Johnny Sexton’s return at out half after he completed the Return to Play protocol following a head injury against Exeter while hooker Sean Cronin is also back in the side from that game.

Leinster are without some key players with Adam Byrne, Sean O’Brien, James Ryan, Jack McGrath, Cian Healy and Richardt Strauss out but with 47 players used, Cullen will be confident his charges can deliver.

Connacht don’t have any fresh injury worries but are still missing a number of key personnel.  But following their victories over Brive and Ulster, and locked in a race with Cardiff Blues for a Champions Cup position, the nine-day turnaround gives them a golden chance to succeed.

Already 16,000 tickets have been sold and another 3,000 could be added by the time the teams take the field for the first meeting this season.  Leinster won both clashes in 2016-17 but Connacht were victorious two times out of three the previous year.

Should Connacht prevail, it will be another confidence boost before their trip to Munster five days later as Keane’s team is starting to take shape.  But Leinster’s strength in depth is huge and they have a winning habit and may just do enough though a bonus point is well within Connacht’s grasp.