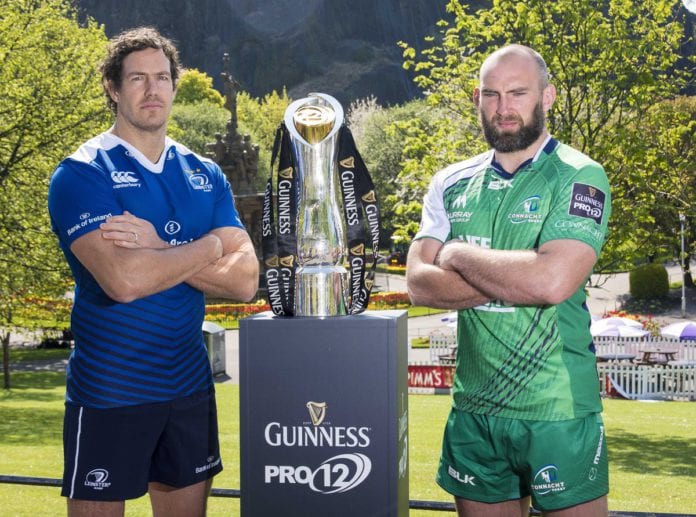 Disappointment for Connacht as they come up just short against Leinster.  They’ll stay fifth place in Conference A of the Guinness PRO14 before their next ‘derby’ outing in Thomand Park against Munster on Saturday.

We’ll  have a selection of match reports from today’s game available shortly.  And to see the up-to-date table, just click HERE.

Thank you for joining our coverage and we hope you join us again from 6pm on Wednesday night (3rd January) as Galway’s senior footballers begin their 2018 season with the opening game of the Connacht FBD League against Sligo.

Tough luck Connacht. Gripping finish to a great game. Epic defence by Leinster to hold them out, in fairness. #LEIvCON

I thought the referee favoured Leinster heavily. Great defence from #leinsterrugby to be fair but you've got to love watching #Connachtrugby always entertaining and I think may go all the way in Challenge cup

@connachtrugby
What a game of rugby in the RDS. Anyone thinking Connacht are a soft touch, think again, we are tough bastards.
Pride & Glory from Connacht.

This is what it means to beat your rivals 👏

Those #Leinster players will feel the bruises tonight after holding #Connacht out for the last 6 minutes. Close game 21 -18 and great to watch #Pro14 #RDS #Dublin

Disappointing. Connacht gave it everything right up to the end.

Despite 28 phases of play in the closing moments and getting within three metres of the opposing line, Connacht can’t get the match saving score as Leinster’s defence hold out.  Disappointing after a gallant effort!

If you'd a ticket for this game and didn't go, shame on you. Cracking match. @leinsterrugby @connachtrugby #LEIvCON

Connacht a joy to watch. Some better kicking in this game and they would have won. Without vardy Leinster looked rudderless #LEIvCON

Penalty Connacht on halfway… but the kick doesn't find touch and @jameslowenz boots it down the line. (21-18, 79') #LEIvCON

Matt Healy's sidesteps are worthy of #Riverdance … brilliant try for #Connacht 21-18. Two minutes to go. Nothing in it. #LEIvCON Cmon #Connachtrugby pic.twitter.com/12DhdFYId4

Connacht really putting it up to Leinster. Great to see them back playing so well. Christmas/New Year Derbies have been super.

Wasn’t able to get two decent seats together via ticketmaster so decided to watch at home. See lots of empty seats on TV that I would have bought. Can season ticket holders not sell on seats they won’t be using?

#connachtrugby It's an easy game if you're allowed cheat, and the opposition are not: Three times Leinster came in from the side: Every ruck someone is being held back: YET only Connacht have been penalised

But, sexton went for the place ball, ball fell over THEN he decides to drop kick and misses. THEN the referee decides that he can take again…hold on, am I missing something? That and Connacht are now coming out the wrong side of every call. Bar the last one for holding on.

That's a monster from Johnny Sexton!💥

#connachtrugby Penalty Leinster on halfway 13-14: Dont think it would have been called on blue

ACTION REPLAY | @FinlayBealham comes up with the ball after touching down on the stroke of half time #LEIvCON pic.twitter.com/ocMXLsnyvl

What a response from @connachtrugby! Pace, power and quick hands sees @FinlayBealham go over.

#connachtrugby Leinster get pinged for a high tackle: 11-6

All too easy for Leinster there. I'd like to see Sexton's pass again earlier but we can only blame ourselves for this. Leinster 11 Connacht 3 #LEIvCON

.@JohnnySexton sends @LukeMcGrath93 away down the left wing but Matt Healy comes across to make the tackle about 15m out from the Connacht line. (6-3, 26') #LEIvCON

A break from @LukeMcGrath93 nearly sends @KearneyRob over! @DanLeafy94 dives for the line but the ball is held up. Leinster scrum. (3-3, 23') #LEIvCON

#connachtrugby We are blowing too many chances: Mind you Leinster are not rolling away

The rugby mood both Connacht and Leinster are in, this game should be a cracker. #LEIvCON #TG4

We are 15 minutes from Kick Off here – We will have all the action as it happens from the RDS #LEIvCON pic.twitter.com/ALMUZjMrux

It's that day of the year again when I support Connacht and Munster and the Mrs supports Leinster and Ulster.

As much as Connacht have hit a bit of form I can only see Leinster winning comfortably. Home side by double digits #LEIvCON

Leinster won both of their matches against Connacht last season, while the westerners have won just three times against Leinster in Dublin since they first met in 1932: in 1955 and 1985 at Lansdowne Road and in 2002 at Donnybrook

Connacht have won only twice away from home against a fellow Irish province in the history of the Championship: in Leinster in 2002 and in Munster in 2015

Connacht have lost their last six away games in the Championship since they beat Edinburgh at Myreside, 22-19, in April

Rob Murphy and William Davies preview Leinster v Connacht in the PRO14 Rugby today that kicks off at 3:15pm…. https://t.co/wbJ369rXfm

Scene set. In our away strip this afternoon for the 3:15pm K.O. pic.twitter.com/PUhCv998vw

Welcome to our Match Tracker on New Year’s Day as Connacht go in search of a first competitive win in Dublin since 2002.  Leinster have been beaten only twice this season but Kieran Keane’s men will look to add to their stunning victory over Ulster on December 23rd and get a fourth consecutive victory.