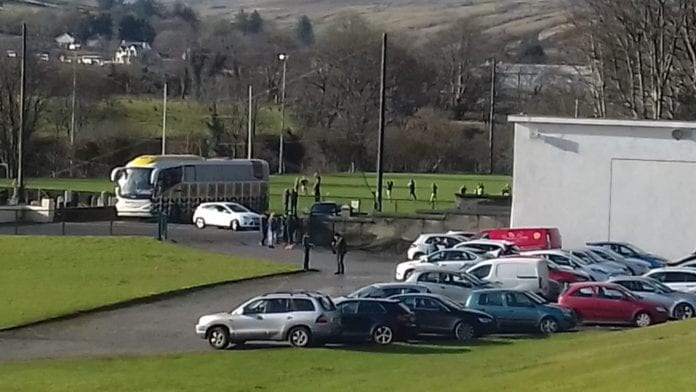 An exciting finish on Sunday saw Donegal and Galway finish all square in the Ladies National Football League.

With two minutes remaining, the Tribeswomen trailed by 1-11 to 0-11 before they got back level, fell behind, went ahead and saw the victory snatched away in the seventh minute of added time.

Mairead Seoighe only entered the field on 51 minutes but had a massive impact kicking five white flags.  Galway struggled with their frees following a knee injury to Tracey Leonard led to her removal at half-time.

The Clonbur striker landed two placed balls before capitalising on a Laura Gallagher error to make it 1-11 to 0-14.  Yvonne McMonagle looked to have broken Galway hearts when she took Niamh Hegarty’s pass for the lead but two more scores in a minute for Seoighe pushed the maroon and white ahead.

Donegal needed an equaliser and after three quick fouls, McMonagle converted to share the spoils.  Deservedly based on the full contest, harsh on Galway for the finish.

Hegarty gave the Tir Conaill women ahead inside 13 seconds before three Leonard kicks had Galway 0-1 to 0-1 ahead on six minutes.

Galway were getting chances but their opponents’ high free concession disrupted fluency.  Donegal started to get on top with McMonagle and Treasa Doherty tallying but the latter’s run on 26 minutes was permitted too much space and she squeezed the ball past Dearbhla Gower for Donegal’s goal.

Aoife McDonnell made it 1-6 to 0-5 three minutes before the interval and both teams hit patches by half-time.  Leonard (2) and Emma Reaney reduced Galway’s deficit to one before Katy Herron and McMonagle gave Galway a three-point lead.

That margin remained even if Galway’s bench increased the intensity with Ailbhe Davoren (twice) and Reaney denied by three superb Gallagher blocks.  The teams traded four scores leaving it 1-10 to 0-10 before Karen Guthrie gave Donegal a four-point cushion.

Sarah Conneally reduced arrears before Seoighe took centre stage.  A winnable game but one they had to fight for a result.  Galway won’t leave Donegal too despondent before they host Mayo in Pearse Stadium next Sunday.