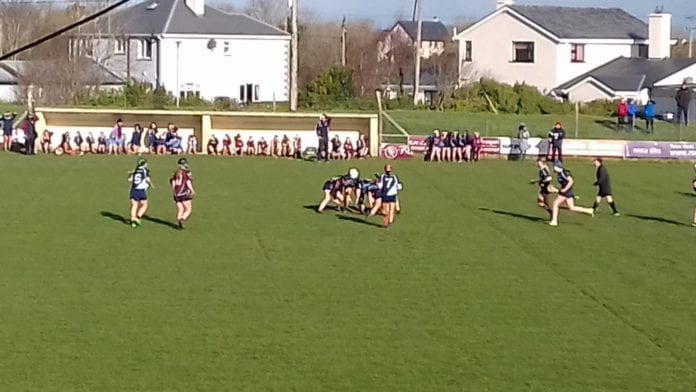 It was a game that was still in the melting pot entering injury time after a Niamh Niland free had Athenry just three points behind.

But having scored two points herself and set up the first goal, Garvey got the deserving winning goal on 63 minutes to complete a double for St. Brigid’s.

The Loughrea school started strongly as Galway senior Sarah Healy opened on four minutes.  But they were behind within 60 seconds as the defending provincial title holders hit the first goal.

A scramble of attackers applied pressure on the St. Brigid’s defence before Tara Stephens got the touch to make it 1-0 to 0-1 in Athenry’s favour.

Healy hit back with two placed balls to level before they shared parity three more times in the first half.  Niamh Niland was Athenry’s chief scorer getting three points while Healy responded with a brace and Garvey registered her first.

Michelle Prendergast gave St. Brigid’s a 0-7 to 1-3 interval lead but they hit the front nine minutes after the restart.  Garvey was the provider finding Farragher inside and the centre forward kicked past Nessa Kelly to make it 1-7 to 1-3.

Garvey and Kelly added scores putting nine between the teams before Athenry finally got back into the match on 49 minutes when Niland and Stephens combined before Sarah McCartin’s ground stroke beat Katie Gilchrist.

Just three between them and Athenry nearly had another chance as Gilchrist produced a great save from Niland.  Healy got a St. Brigid’s score but Niland responded on 62 minutes as Athenry chased a saving goal to force extra-time.

The major did come but at the other end as Garvey finished to the net after Kelly save from Caoimhe Starr.  After relinquishing their title to the same opposition in 2017, St. Brigid’s are back in the All-Ireland semi-finals in two weeks.