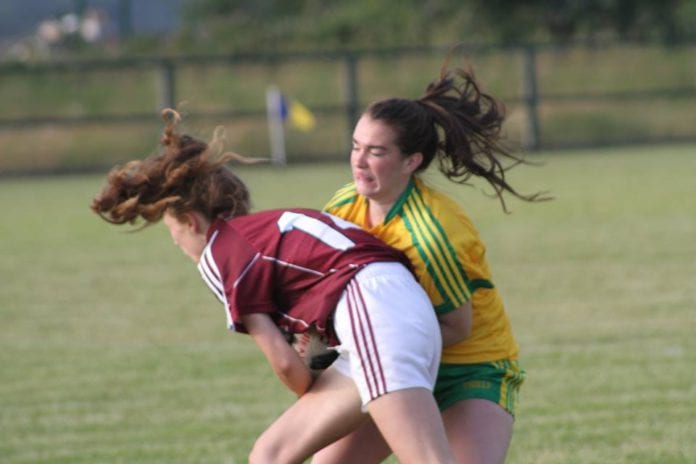 Galway’s under 16 ladies footballers took their place in an All-Ireland Final against Kerry on Wednesday, 25th July.  Goals from Kate Slevin, Eva Noone and Therese Kinnevey had Stephen Hession’s charges always in control even if Donegal were competitive in the first half.

This was built on a strong foundation from full back Megan Walsh, wing backs Shauna Brennan and Chellene Trill all the way to the three goal scorers, Niamh McPeake and substitute Ciara Murray.  Slevin and Noone got Galway’s opening points but they often pushed up too far leaving gaps in defence.

Niamh McDonald got a fifth minute goal but Galway replied within 60 seconds as Slevin got her three-pointer.  McPeake and Noone (2) made it 1-5 to 1-0 but Donegal reaped 1-3 unanswered including Megan Havlin’s goal giving Greg Harkin’s team a 2-3 to 1-5 lead on 18 minutes.

It was only a brief moment of uncertainty as the maroon and white’s character shone through.  Six unanswered points through Noone (3), Laura Kelly, Slevin and Power put them five clear.  And after Walsh replied, Noone’s seventh made it 1-12 to 2-4 in injury time.

Galway’s second goal before half-time was the defining score as Noone put eight between them.  And after the break, Noone, McPeake and Shauna Brennan stretched the margin while Eimear Alcorn’s yellow card for a high challenge had Donegal down to 14 players.

On 42 minutes, final plans began in earnest when Kinnevey smashed a deserving goal to the net making it 3-15 to 2-4.  The race was won even if Galway were caught for two consolation goals for McDonald and Havlin and moved within one hour of a fourth ever crown!