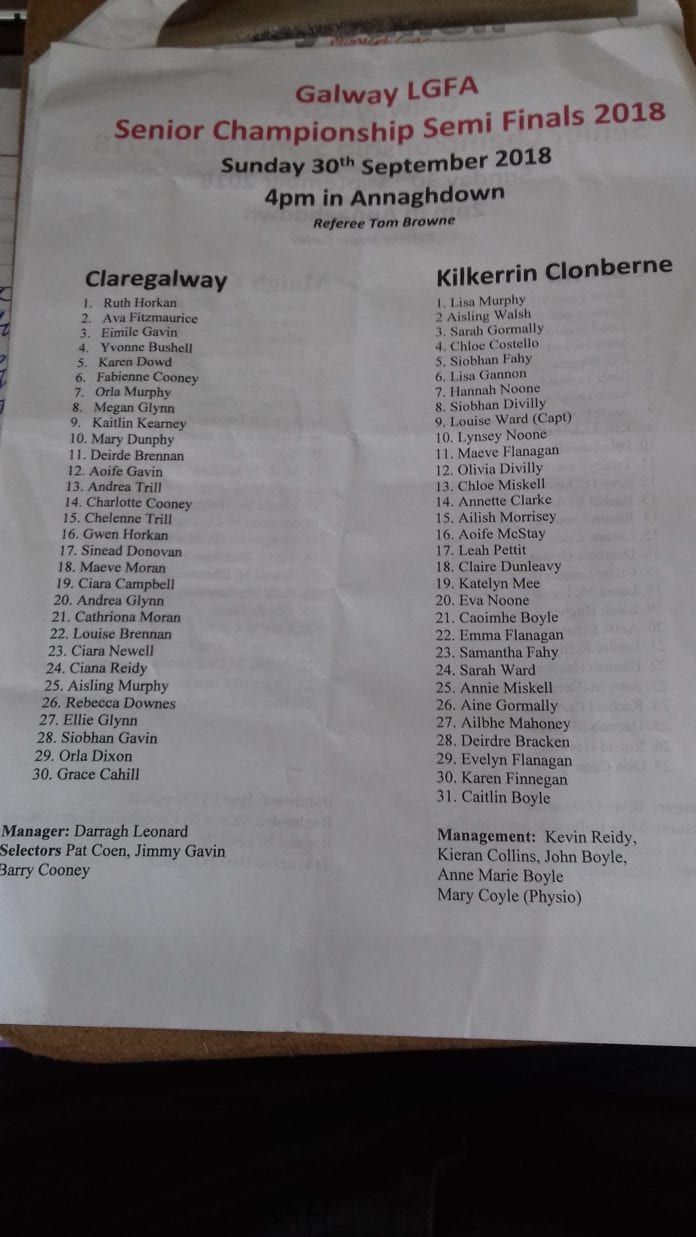 It would be hard to work out how the rival managers slept after this county senior ladies football final.  This wasn’t a pretty contest but it was more competitive than the score line suggested.  And both Darragh Leonard and Kevin Reidy would have had plenty to mull over in the early hours.

For Reidy, he’d be happy his team advanced and looked relieved, and content, after the final whistle. There were positives from how Kilkerrin/Clonberne applied themselves after going two players down.  But he will also know this was the most vulnerable they were in Galway in six years.

And that will hurt Leonard and his charges as they reflect during the winter.  Their tactics were spot on!  They closed the space to their opponents.  They engaged in hard challenges, often sacrificing the body for a breaking ball. Poor Deirdre Brennan surely has bruises this week.

Kilkerrin/Clonberne have been the standard bearers in Galway and they are 60 minutes away from completing an amazing six-in-a-row.  But Claregalway will feel they had them in point blank range and didn’t aim for the target.

When Brennan got Claregalway’s goal on 37 minutes, the teams were level at 1-5 to 0-8.  They had an extra player following Karen Dowd’s return from a yellow.  And three minutes later, Lisa Gannon was sinbinned meaning Kilkerrin/Clonberne remained with 14 players as Lynsey Noone was back.

But Claregalway didn’t threaten their opponents.  There were individual forays led by Brennan, Andrea Trill, Megan Glynn and Fabienne Cooney later on.  But one felt that they were hesitant to risk it all in case they got opened up in defence.

As it turned out, that fear was realised on 42 minutes when Siobhan Divilly and Noone interchanged passes before the latter slotted to the net.  Kilkerrin/Clonberne were 1-9 to 1-5 ahead a player down and added two more frees from Olivia Divilly.

Another chance presented itself when Chloe Miskell received a straight red card after an altercation with Brennan.  It was a blow for the young star who’d put in a good performance kicking two points but will now sit out the county final.

That happened on 48 minutes and Claregalway now had two extra players.  While there was some more urgency, they needed to throw caution to the wind but anytime they entered the Kilkerrin/Clonberne half, they managed to leave their chief attacker isolated.

Divilly added two Kilkerrin/Clonberne frees after Gannon returned before substitute Eva Noone finished with 1-1.  The scoreboard looked impressive for the defending champions but the performance was anything but.

It’ll be a nervous week ahead of the showdown with Corofin and they are without the injured Nicola Ward.  Claregalway didn’t have Charlotte Cooney either but they had a chance.

Again, it’s a learning experience but that statement would probably see this article torn to shreds if it was printed on newspaper.  Kilkerrin/Clonberne survive and how they react will define their year.  But Claregalway will feel they had them.  Next time, they can’t hesitate with the trigger!