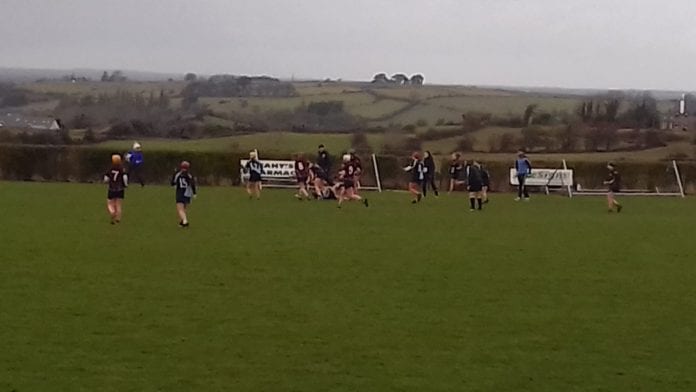 The top two schools in Galway camogie couldn’t be separated on Friday as Presentation College, Athenry and St. Brigid’s College, Loughrea finished all square in the Connacht Senior A Final.

Sarah Healy’s equalising free in the fifth minute of added time put St. Brigid’s back on level terms in a final 10-minute spell that had supporters gripped.

Athenry led 0-5 to 0-1 at half-time with Niamh Niland contributing all their scores and she finished the game as their sole scorer.

Niland opened on two minutes before a Healy free levelled matters.  But three unanswered placed balls from the Athenry full forward put Fiona Page’s team to the front before getting one from play before the break.

Both goalkeepers were called into important first half stops.  St. Brigid’s Katie Gilchrist made a superb block from Sabina Rabbitte before also denying a resulting Niland free.  While Athenry’s Nessa Kelly was equally alert getting a stick to Caoimhe Starr’s hand pass.

Starr opened for St. Brigid’s after the restart but Niland restored Athenry’s four-point cushion.  However, St. Brigid’s were back in the contest in the 38th minute.

With the elements, Chloe Farragher’s dangerous ball was batted by Kelly but Healy reacted quickest taking possession before hand passing for a priceless goal.

Two minutes later, Tegan Canning found the target on the right to level at 0-6 to 1-3 but a fierce Niland shot on 42 minutes grazed over the bar to put Athenry back ahead.

There was little in a competitive joust that, despite some hailstones, the weather managed to stay friendly over the hour.

Healy’s 45 levelled again on 47 minutes but two more Niland minors looked to have Athenry in control as they led 0-9 to 1-4 with four minutes remaining.

St. Brigid’s needed composure and it came from Galway senior Healy who landed a brace of frees to equalise again but when Niland troubled the umpires on 63 minutes, Athenry were set for victory.

One last chance was seized by the 2016 All-Ireland champions as Healy forced the sliothar over from the right.  These teams will meet again to decide provincial silverware.