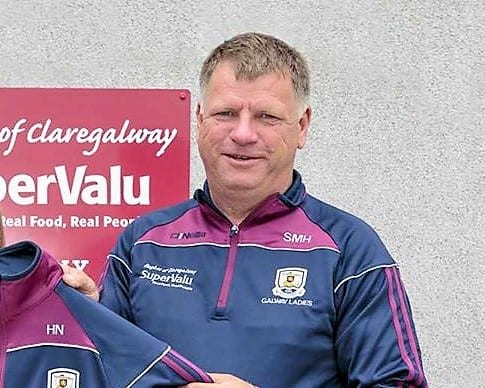 Galway under 16 ladies football manager Stephen Hession kicked every ball and contested every challenge with his players as they were crowned 2018 All-Ireland champions on Wednesday, 25th July.

The county’s fourth title (after wins in 2003, 2012 and 2017) was secured when they came back from eight points behind to force extra-time.

Two Aoife O’Rourke goals gave them a dream start and Kate Slevin got the crucial major on 68 minutes to give them a lead they never relinquished as they became Galway’s first team to successfully regain the under 16 title.

Hession was under 14 manager in 2017 when they secured All-Ireland success and this victory brought Galway’s underage titles to five in less than two years.  He chatted to Galway Daily after the final whistle.

🏆 A magnificent All-Ireland U16 A final in Toomevara (@ToomeGAA) went @GalwayLgfa's way after extra-time.

🏐Kate Slevin scored 1-7 for the winners as 3-6 for Síofra O'Shea wasn't enough for @kerryladiesfoot@ConnachtLGFA @MunsterLGFAhttps://t.co/NDT45XzPxu