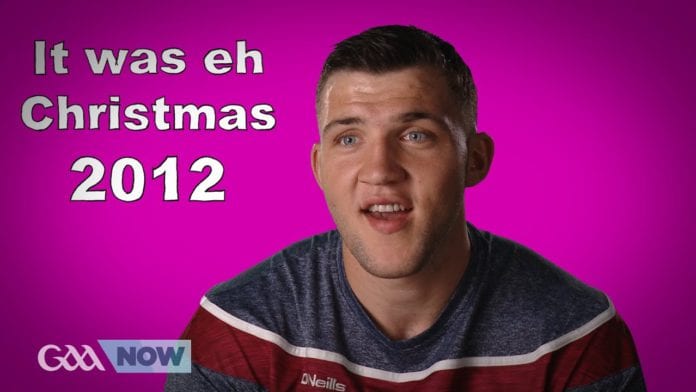 Galway senior football captain Damien Comer is the subject of a GAA animation series where inter county players talk about aspects of their career.

‘The Call-Up’ from #GAADrawnStories sees Comer discuss when he was first asked to join the maroon and white set-up in 2012, kicking off his Galway career that led to him getting the captain’s armband six years later.

“It was Christmas 2012 and I suppose I was after enjoying the Christmas like any good person does,” said Comer on the animated video below.  “And we’d a few social outings and eating all around you.

“I got a text, a big, long winded text asking me to the under 21s and it was signed at the bottom – Alan Flynn.  And to be honest at the start, I wasn’t sure whether it was one of the lads or I was actually getting a trial.  I decided to text him back and see who it was.

“He was like (saying) “Yea, there’s training one, come on up.”  And I just texted one of the lads to make sure that there was training on the same night.

“There was a three-mile block around our house that I ran.  I rant that two days-in-a-row trying to build up a bit of fitness.  It was my first ever Galway training session and I nearly died.”

See the enclosed tweet with the full video and look out for more animated videos from #GAADrawnStories.

With the help of a little animation, this @TribesmenGAA star recalls his first encounter with Inter-County life! This is GAA Drawn Stories 'The Call-Up' with Damien Comer #GAADrawnStories pic.twitter.com/hicy03SFLh

Galway face Monaghan in the final round of the 2018 All-Ireland Senior Football Quarter-Final round-robin series on Saturday, 4th August.  Throw-in at Pearse Stadium is 6pm.