LGFA: “You Can Always Trust the Players” – Rebecca McPhilbin 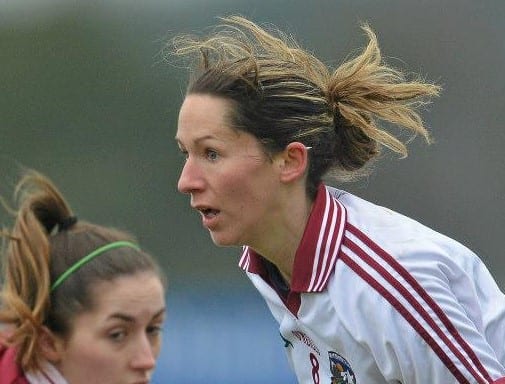 Rebecca McPhilbin has done it all and continues enjoying this journey her club are on as they moved within 60 minutes of a first Connacht intermediate title in 17 years.

The centre back kicked a point and was involved in the move that led to the second goal.  And she has really enjoyed her return to the Ballygar/Newbridge outfit as they set up a Connacht Final appearance with Mayo’s Westport.

After five consecutive weeks, they’ll enjoy a week off as this was another tough encounter to follow the two duels they faced against Tuam/Cortoon.  But even though they still have plenty of work to do, they’ll continue their run into November and hopefully further.

“It was an absolutely tough game,” said McPhilbin afterwards.  “There were times there you just needed to get stuck and keep going.  So, now we’ve a Connacht Final to look forward to.  Credit to the girls, and even the subs that came on.

“It’s not just about the 15; it’s the 30 players that we have there.  And they just kept going and anyone that came on, they got stuck in straight away.  It was just one of those games.

“They were a fairly physical team and we knew that coming out here today.  They’re senior in Sligo but then they went intermediate in Connacht.  We knew it was going to be a tough battle.  Everyone just stuck to our game plan.

“Everyone kept going even when we lost the ball, you got a hand in or got something in.  You just kept going and I’m just glad we came out the right side of it today.”

“The first day when we drew with Tuam/Cortoon, we missed a sight,” added the 2004 All-Ireland winner when it was mentioned that St. Brendan’s kicked nine first half wides.

“We went back training and we worked on kicking and then last weekend, everything nearly went over the bar.  And I think that’s one thing we’re going to work on over the next two weeks – our points taking.  Something to work on anyway.”

And finally, a thought on the two corner forwards, Rebecca Conway and Sinead Langan who struck the decisive goals?

“Rebecca is one of those great corner forwards that’s always going to get a goal or two for you in a game,” concluded McPhilbin.  “And you do rely on herself and Sinead Langan in the full forward line to get them goals.  And luckily today, she got one.

“You always know it’s going to go into the back of the net if Sinead or Rebecca is going to be taking the shot.  But yeah, it was a well worked move up and fair play to Linda as well.  She was part of the move as well.  And thank God, the girls finished it.

“You can always trust the players that you’re giving the ball to to do something good with it.  That’s the one thing we all have here for each other is trust.”

Second rejection of controversial Doughiska development from An Bord Pleanála

Galway pizzeria named in list of best pizzas in… Europe!

Report on feasibility of the Western Rail Corridor welcomed