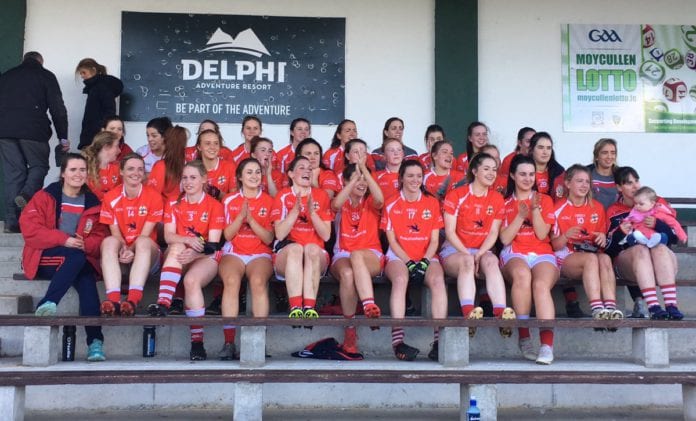 With the dust barely settled from their respective celebrations, Kilkerrin/Clonberne, St. Brendan’s and Naomh Anna Leitir Moir commence Connacht championship action this Sunday (14th October) as they seek a place in their respective provincial finals.

Olivia Divilly and Lynsey Noone hit two first half goals each before Eva Noone also contributed a brace.  Maeve Flanagan got the other three-pointer in an emphatic 7-16 to 3-6 result.  Sarah Gormally and Lisa Gannon will lead the defence that also includes attacking wing backs Siobhan Fahy and Hannah Noone.

Siobhan Divilly and captain Louise Ward are a solid midfield combination with the aforementioned attackers of doing damage.  The Galway six-in-a-row champions will still be without the injured Nicola Ward.

Kilbride have been dominant in Roscommon for the last three years having completed a triple double two weeks ago.  Lorraine O’Connor’s penalty save was crucial in their 3-4 to 1-5 win over Clann na nGael.

Sinead Clabby, Fiona and Siobhan Tully got the goals and their half back line includes Roscommon seniors Rochelle Mullaney and Alice Kelly.  In truth, Kilkerrin/Clonberne will be expected to come through.  And that will the key for an expected provincial decider with Carnacon.

St. Brendan’s play for the fourth consecutive week when they welcome Sligo senior champions St. Nathy’s in the intermediate semi-final.  Michael McHale’s team finally got past Tuam/Cortoon after a replay thanks to goals from Michelle Delaney and Leanne Walsh.

Delaney and Walsh will be two main threats along with experienced duo Rebecca McPhilbin and captain Nora Ward but an injury to full back Aine Gilmore will make life difficult for the Galway intermediate champions.

St. Nathy’s were also in action last weekend beating Geevagh 0-13 to 0-9 in a reverse of the previous year’s Sligo final.  Noelle Gormley in goal; defenders Angela Doohan and Jane O’Dowd, midfielders Tara Doddy and Ann-Marie Coleman, and attackers Carol Coleman and Una Cafferky are ones to watch.

And Junior A champions Naomh Anna Leitir Moir are also seeking a Connacht Final place when they welcome Roscommon’s St. Dominic’s to Ros an Mhil.  The west Galway team beat St. Mary’s, Killererin in the county final and will have Sarah Lynch leading their charge.