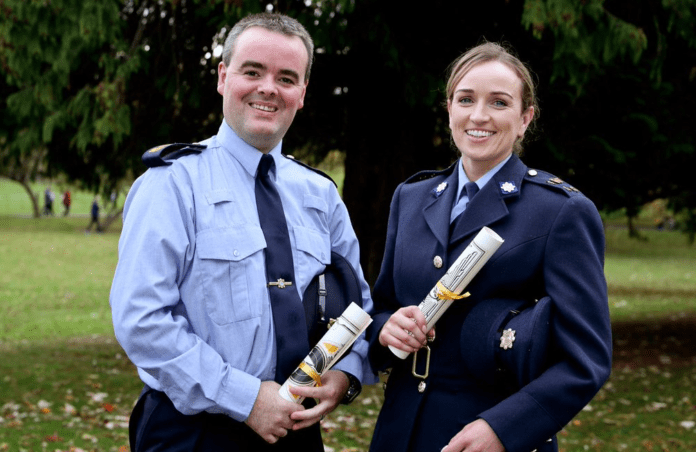 The two Galway Gardaí were among 21 people who received National Bravery Awards at a state ceremony yesterday.

They were nominated for this award for their act of heroism in saving the life of young man who fell into the river Corrib on St. Patrick’s Day.

On March 17, just after half 4 in the afternoon, Garda Freely and Garda Burke were on duty down at the Spanish Arch when they saw a man standing on the edge of the wall next to the Corrib.

As he saw them looking the man “put his arms out, leaned back and intentionally went back first into the water.”

Their citation says Garda Burke jumped into the water after the man, but got into difficulty as they held onto each other.

Garda Freely called for more assistance, and with another reserve Garda used a life buoy to bring them to the wall, and pulled Garda Burke from the water.

Other passers by also helped in keeping the other man afloat by reaching down and holding him up until he could be brought from the water.

Ceann Comahairle Seán Ó Fearghaile, whose office organises the National Bravery Awards, praised all those being recognised for their “selfless acts of courage”.

“Your strength of character and depth of courage, when faced with the uncertain, is exemplary. You stepped forward, despite the risks, to help your fellow man.”

The 21 people who received Bravery Awards this week come from all walks of life.

Many were gardaí, firefighters, or paramedics, but other were simply good people who stepped up when they saw someone in need.

The full list of people who received citations for bravery, and what they did, can be found here.