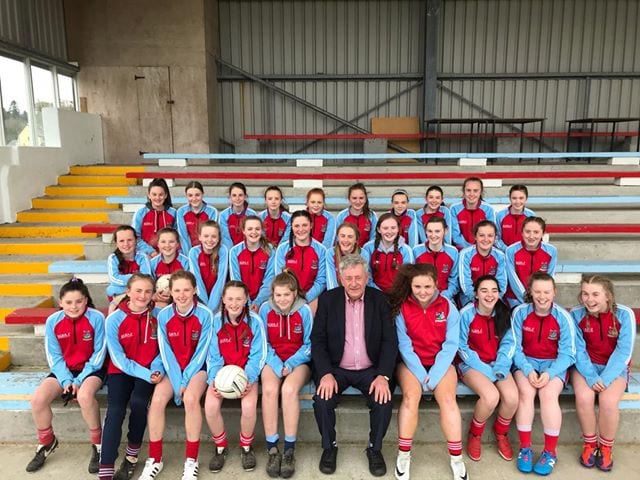 Monivea/Abbey under 14 ladies football team are in the County under 14 Division 1 Ladies Football Cup Final on Sunday afternoon (14th October) in one of 13 titles being decided over two days.

They’ve already won the Division One league in 2018.  And this amazing group of girls have shown their talents across multiple sports.  In camogie, they won the Feile Division One Shield before coming up just short in their championship final against Davitts.  It truly has been a great year.

However, in order to complete a football double.  They must overcome a determined Claregalway team who got the better of Salthill/Knocknacarra in the semi-final.  The two teams meet in Headford at 2pm and for Claregalway, it’s an opportunity to pick up their own pair of trophies.

Claregalway’s B team are in the Division 5 cup Final and their decider forms a double header with the Division 1 game.  They’ll meet An Spideal in Headford at 2pm.

The Division 2 Cup Final takes place on Saturday (13th October) in Skehana when Glenamaddy/Williamstown and Naomh Mhuire lock horns at 2pm.  And a massive crowd is expected as this will be preceded by the Junior C Final between Ballinasloe and St. Michael’s (12pm).

In Division 3, the Cup Final will be decided in Claregalway on Sunday at 2pm when Menlough/Skehana face Loughrea.  And they’ll be joined at 12pm by the Division 4 Cup Final between Salthill/Knocknacarra and Mountbellew/Moylough.

The Shield Finals also take place across the two days.  And away from under 14 action, Mountbellew is also expected to see a sizeable crowd for a double header which includes the Intermediate Ladies Football Final Replay on Saturday.

St. Brendan’s and Tuam/Cortoon played out a tightly fought 2-3 to 1-6 draw in Moycullen last Saturday (6th October) and will clash again to see who advances to the following week’s Connacht semi-final.

Throw-in at Mountbellew is 4pm and that follows the Junior B Final between St. Gabriel’s and Glinsk at 2pm.

U14 Div. 1 Cup Monivea Abbey vs. Claregalway A 2pm Headford

U14 Div. 5 Cup Claregalway B vs. An Spideal 12 noon Headford