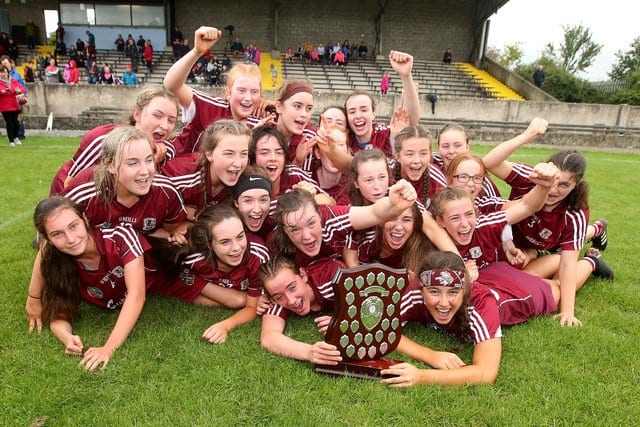 Introduced this year to keep young players involved in county set-ups, Mike Butler’s charges showed glimpses of future stars as they delivered a storming performance to seize the initiative against the wind.

Sabina Rabbitte took the plaudits with a 4-4 contribution while Laura Kelly, Sinead King and Fodhla Ni Bhraonain also netted majors.  But the performance of Chloe Farragher shouldn’t go unnoticed as she was one of the driving forces in Galway’s win.

Cork had the strong wind at the start and came close within 40 seconds when Aoife Twomey hit the side netting.  But they did open on three minutes when Kate O’Shea converted a free.

O’Shea, Ella Woods and Ciara Beechinor were Cork’s stars upfront but their defence found Galway hard to close down.

Farragher picked out Rabbitte for the first goal on seven minutes.  And the Davitts winger was provider again 60 seconds later when King calmly struck low inside the right post to make it 2-0 to 0-1.

Eventually the resistance was broken as Katelyn Lyons found Rabbitte on 21 minutes for the third goal making it 3-4 to 0-1 before Cork finished the half strongly as O’Shea (3), Woods and Saoirse Desmond troubled the umpires.

Galway led 3-5 to 0-6 at half-time with Rabbitte adding a minor.  But the Athenry full forward was in goal scoring mood and completed her hat-trick on 32 minutes.  Ni Bhraonain had been denied a couple of times but made it third time lucky 60 seconds later with Galway’s fifth goal.

Cork reduced arrears through Beechinor and O’Shea but the Rebelettes couldn’t get three-pointers as Farragher set up Rabbitte for another for Galway on 38 minutes.  And Kelly’s long free ended up in the net for the seventh before Rabbitte’s point completed Galway’s account on 46 minutes.

Cork enjoyed the best of the last quarter getting 2-2 unanswered.  Lucy McNulty hand passed to the net on 54 minutes.  And O’Shea hit the target in injury time.  But the result was beyond doubt as Galway’s reserves were crowned All-Ireland champions and set up the first half of a historic double.