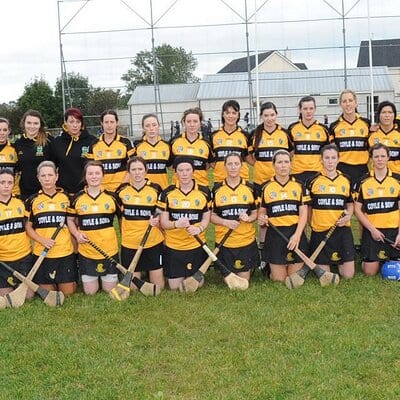 Four Roads started with two goals in the first eight minutes.  O’Brien struck the first major three minutes beforehand.  And then Niamh Cormican was quickest to react after Niamh Coyle’s effort towards goal was batted out by keeper Niamh Quinn.

However, Killimor, missing their inter county players not eligible in this competition, hit back three minutes later when Ciara Fahy’s pass allowed Mairead Mooney’s delivery drop under the crossbar for a Killimor goal.

A fantastic performance by our Senior team this evening saw the Division 1 Connacht League title come to the Club for the first time! Final score Four Roads 2.13 Killimor 1.5. Well done to the team and management!

It was resembling a soccer match as Four Roads led 2-0 to 1-0 and Fahy put over the game’s first point on 11 minutes.

Some confusion, controversy even, reigned on 15 minutes when the recently introduced Maeve Muldoon’s long shot was waved wide.  Many in Ballinasloe felt it was a goal but after referee Enda Loughnane consulted with his umpire, a white flag was the outcome.

That point did leave just one between them before two O’Brien frees had Four Roads 2-3 to 1-3 ahead on 19 minutes.  Muldoon replied for Killimor and Fahy forced a save from Cait Kenny on 28 minutes.

Three crucial points gave Four Roads a 2-5 to 1-3 buffer at the break.  O’Brien contributed all three including two from play, one from a Donna Kelly pass and another from a tight left angle.

Another O’Brien minor two minutes after the restart left it double scores before Denise Starr found Emer Fahy for a Killimor point but that was as close as the Galway outfit got.

Muldoon sent over Killimor’s last score as they tried to create goals.  Ciara Fahy forced Kenny into the save of the night with one hand.  While Four Roads’ defence were defiant in the closing stages.

Four Roads also looked to dress up the scoreboard and O’Brien did register from two other chances.  Killimor will be disappointed not to take the trophy that would have given a major boost ahead of the resumption of the domestic championship when they meet Athenry next month.