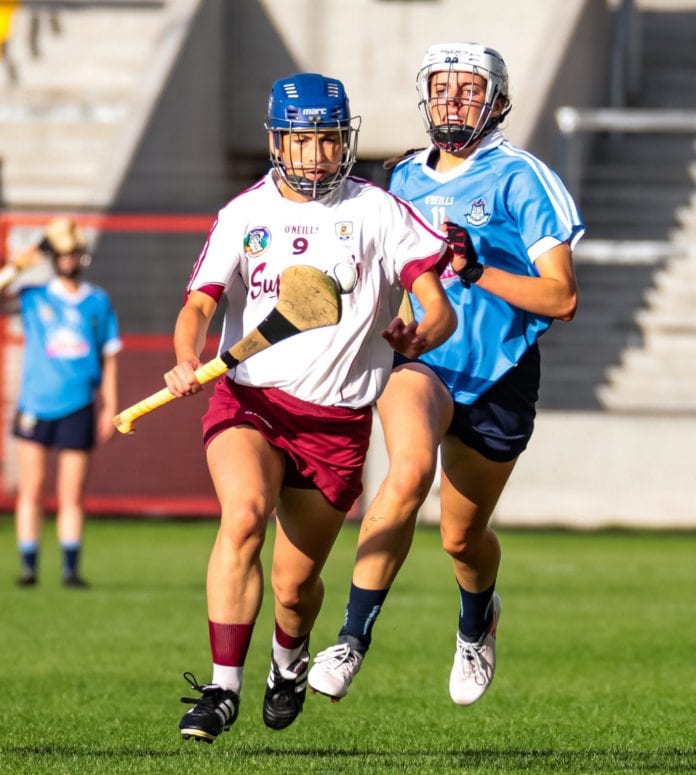 Dublin’s threat never materialised as Cathal Murray’s charges calmly outscored their opponents.  With eight different scorers from play, the Tribeswomen survived early goal threats to stamp their authority on the contest, keeping the Leinster outfit waiting 37 minutes for a score from play.

After their poor display against the Noresiders two weeks previously, the Tribeswomen focused on getting the job with minimum fuss, giving panelists game time and ensuring their top four status remained for a 13th consecutive year.

Dublin, history makers and the top story of 2017, completely underperformed as they gambled on goals in the opening quarter.  But Galway’s stern full back line of Shauna Healy, Sarah Dervan and Tara Kenny were uncompromising and allowed their team mates do the damage the other end.

Galway join Tipperary, Kilkenny and Cork in the @LibertyIRL Senior All Ireland Camogie Championships after a sixteen point victory over Dublin pic.twitter.com/w9WctoSA4f

Murray’s team focused on their structures, even if the level of opposition waiting in Semple Stadium two weeks later will be a radical upgrade.  Heather Cooney controlled centre back with ease assisted by Emma Helebert and Lorraine Ryan.

Orla Beagan after just 54 seconds before Caitriona Cormican equalised.  After only seven minutes, the game’s turning point was probably a Dublin attack that required sharp alertness from the Tribeswomen.  Beagan and Mairi Moynihan got within range but Shauna Healy was quick to clear the ball.

A Dolan free on nine minutes was followed by minors for Niamh McGrath and Caitriona Cormican making it 0-4 to 0-1 in Galway’s favour.  Beagan converted again but with Carrie Dolan and Aoife Donohue each contributing a brace, Galway were 0-8 to 0-2 clear at half-time.

The low glare receded for the restart and Dolan split the posts before Sarah Healy registered a penalty.  Alex Griffin finally got Dublin’s first from play but Cormican, McGrath and Niamh Kilkenny tallied for Galway before Beagan left the Metropolitan’s deficit at 0-13 to 0-4.

Donohue got her third and Galway finished with another six white flags through Kilkenny, Noreen Coen, Finola Keely, Siobhan McGrath, Cliodhna Walsh and Niamh McGrath.  The draw afterwards felt inevitable as Kilkenny and Galway were paired again for the third time this year.

Even if they have slipped outside ‘The Big Two,’ Galway’s status as a top three county is beyond question.  The reality is Galway have nothing to lose but know they possess the ability to turn their summer around.  They were expected to reach this stage.  Now their season will be defined!