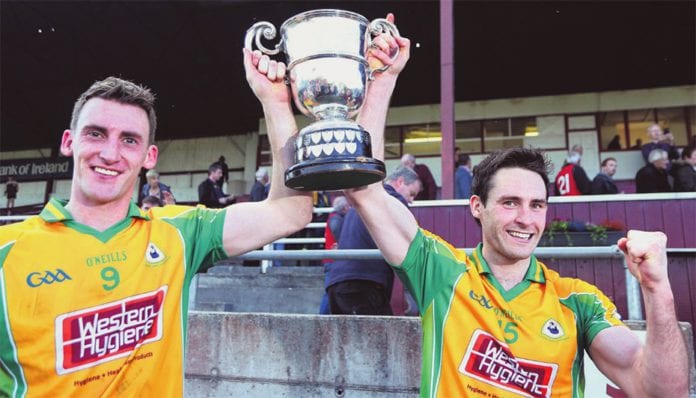 One of the topics discussed at the 2017 Galway GAA Convention was the move to reduce the number of teams playing senior football from 20 to 16 with the first stage being to relegate three teams in 2018 leaving 18 sides battling for the Frank Fox Cup in 2019.

Some were disgruntled about this change others stated that it wasn’t that long ago that only 16 teams competed at the top level.

It definitely has been a trend in Galway football, and hurling, in recent years that the number of senior teams is growing and intermediate clubs are faced with a disadvantage heading into their respective provincial and All-Ireland series’.

While this writer supports the view that 16 teams is enough to participate in any grade of championship hurling and football, the successful revamping of the hurling championship in the last two years has forced a review and Galway football could well look at a similar pattern to reboot their competition.

Two teams are demoted from Senior A to B each season while the bottom two teams in Senior B play-off to avoid relegation into the intermediate ranks.  And so far, the format has met with widespread approval.

This was noted at the Convention.  And it has its merit but there’s no need to be looking to increase teams.  If Galway GAA opt to stay with 20 teams in the top flight, they can run a similar format incorporating four groups of five teams.

The group winners would reach the quarter-finals and qualify for Senior A the following year.  The runners-up would face the Senior A third placed teams in the play-offs.  And the bottom team in each group would contest the relegation final.

Overall, it would breathe life into the championship and guarantee every team four games.  While clubs struggling at senior level can test themselves against similar opposition before advancing to the latter stages.

Now of course, the problem is finding the weekends to play the games in a new condensed calendar and Galway potentially competing in the All-Ireland round-robin series.

Decisions would have to be made early on and the GAA Board may need to play three rounds in the April club window before Galway ramp up their preparations for the Connacht championship meeting with Mayo on May 13th.

Afterwards, it’s about finding a gap in the busy May-August schedule but the weekend of June 24th could be provisionally set depending on whether Galway are negotiating the qualifiers.  If not, this would come one week after the Connacht Final and three weeks before the quarter-final games.

One also has to be fair to the club players and holidays so the weekend of August 19th could be set for the final round.  If Galway were to make the All-Ireland Final, this could be postponed but it would allow the round-robin games to be completed before the autumn.

Another factor is when do the Galway champions begin their Connacht campaign?  Taking recent seasons into account, the target for completing the County Football Championship must be Sunday, October 14th.  Hurling has no provincial championship but football doesn’t have that luxury.

There’s more that can be discussed including restructuring the club leagues to make sure non-county players aren’t sitting idle during the summer.  With league positions not affecting championship gradings anymore, there’s no reason why these competitions can’t proceed without county players.

The debate has been referred to the Football Committee but the above is very workable once all clubs/county managers agree to the set dates.  It will take nine weekends (minimum) to play the senior championship but that is only that is only two Sundays more than the current format.

A lot to discuss and a lot to think about!  But the new calendar could just allow Galway GAA the opportunity to spice up their senior championship and club football scene.