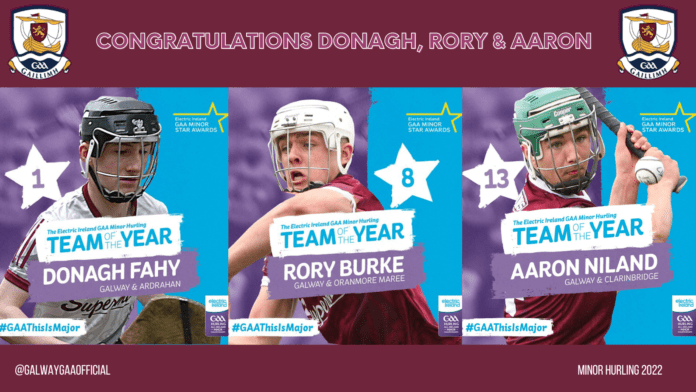 Three Galway players have been named to the 2022 Electric Ireland GAA Minor Star Hurling Team of the Year.

The Galway Minor Hurling made it as far as the semi-finals this year, narrowly losing out to Tipperary 3-24 to 3-20 in June.

Tipp went on to win the All-Ireland with a victory over Offaly at the start of July.

Electric Ireland have this week announced the winners of the Minor Star awards, who make up the hurling Team of the Year.

Ardrahan keeper Donagh Fahy pulled of multiple fantastic saves for Galway over the course of the championship, particularly in the Quarter-Final.

That Quarter-Final also gave Aaron Niland a chance to shine, with the Clarinbridge player amassing 16 points in that game alone, as he racked up the scores from frees and from play.

Galway Minor Captain Rory Burke dominated the midfield throughout the season, with the Oranmore Maree man demonstrating his skills in passing and shooting, creating many scoring opportunities.

Uachtarán CLG Larry McCarthy said, “I am delighted to, once again, have the opportunity to extend my congratulations to the Electric Ireland GAA Minor Hurling Team of the Year”.

“Fans turned out in large numbers to support our Minor players this season and we were fortunate to see the skills of these outstanding players. I look forward to watching the next chapter of their playing careers.”

Adam Screeney, a member of the Offaly Minor Hurling team has been announced as the 2022 Electric Ireland GAA Minor Star Hurling Player of the Year, having scored 5 goals and 51 points this year. 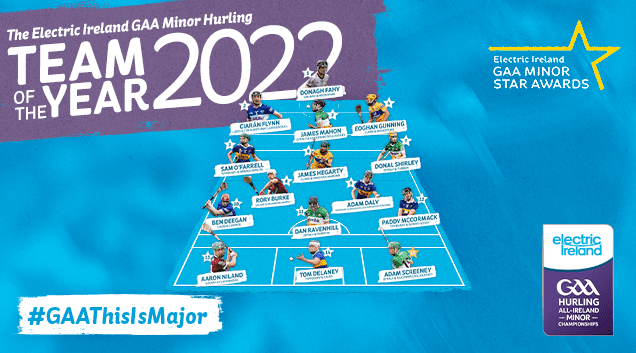 The Electric Ireland GAA Minor Star Football Team of the Year and Football Player of the Year will be unveiled on Tuesday, August 16.

“Each member of the team has contributed enormously to what has been an outstanding season of Minor hurling.”

The full Minor Star Hurling Team of the Year is:

2. Ciarán Flynn (Laois and The Harps)