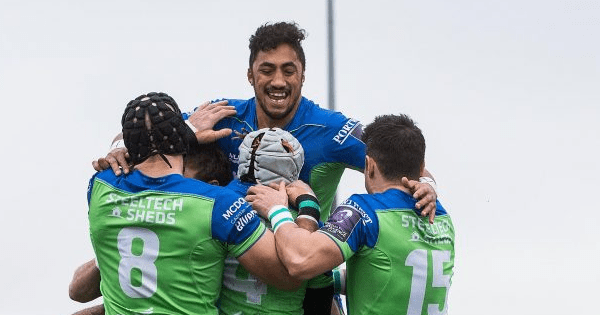 Tries either end of half-time have Connacht on the back foot in the European Challenge Cup quarter-final as Gloucester hold a seven-point lead.

Henry Trinder cut through the opposing defence two minutes before half-time to give the visitors their seven-point cushion after Connacht looked to have overturned a poor start.

Hooker James Hanson was fortunate to win the ball after Connacht disrupted a Gloucester line out in the third minute before charging for the line for the opening try on three minutes.

But six minutes later, Connacht were back level.  Despite Gloucester’s best attempts at tackles, Kieran Marmion found space after Kieran Keane’s men went through the phases to level the teams.

Jack Carty missed the conversion as did Owen Williams for Gloucester and both would be off target again when their teams struck a second time.

Carty and Tom McCartney were the providers for the initial break that allowed Ireland centre Bundee Aki get in for Connacht’s second try on 20 minutes as they led 10-5.

And Gloucester’s early discipline problems came back to haunt them when Ben Morgan went to the sinbin on the quarter hour after a high tackle on Tom Farrell.

But upon his return, the English outfit dominated the concluding stages getting two more tries and having another ruled out.

But on 38 minutes, Henry Trinder treated all in attendance to a super try cutting through the Connacht defence for Gloucester’s third try before Williams became the first kicker to score and Gloucester took an interval advantage.