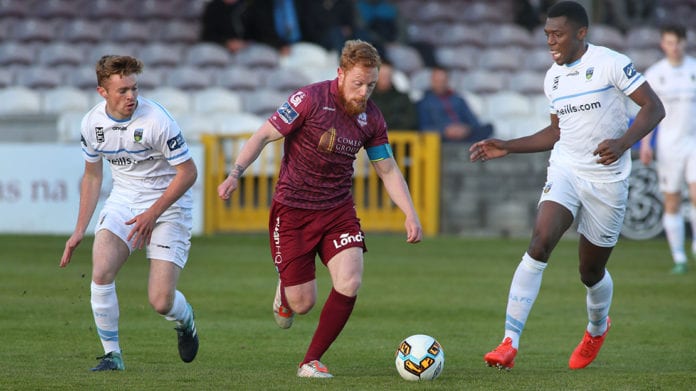 Goals from Eoin McCormack and Ryan Connolly gave Galway United a priceless win on Friday night (11th May) as they beat leaders UCD in the SSE Airtricity League First Division.

McCormack stood over a free on 10 minutes before finding the top left corner for the Tribesmen’s opening goal as they went in 1-0 ahead at half-time.

And with 13 minutes remaining, captain Connolly struck from 30 yards to make sure of the points and move within five points of the students.

“A very big win, to make a statement out there,” said Connolly to Galway Bay FM’s Mike Rafferty afterwards.  “We’ve been getting a bit of abuse from different people outside the club for what’s happening inside the club.  I think we showed tonight that we are really together.

“We believe in what we have in the dressing room.  We went out and put a statement out tonight.  We were a bit unlucky the last few games.  Up in Finn Harps, we created obviously way more than they did and we just got hit with a sucker punch.

“That’s the standard.  We said that at the start of the year.  We’ve been playing well since the Shelbourne game.  It hasn’t been 100% but we’ve been there or thereabouts and I think tonight we hit our levels 100% nearly.  That’s our level now and we’ve got to stick to that every week.

“We were deserving winners in the end.”

Galway United’s next game in the SSE Airtricity League First Division is against Cabinteely on Sunday, 20th May.  Kick-off at Stradbrook is 3pm.

FULL-TIME | Galway United run out deserved winners against UCD courtesy of quality strikes in either half from Eoin McCormack and Ryan Connolly. #GUFC pic.twitter.com/ftekslON3Y