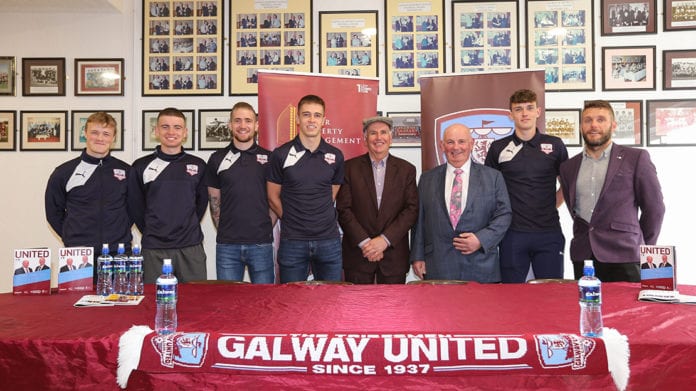 Galway businessmen Luke and Brian Comer have committed to doubling down on their partnership with Galway United FC by donating a site for a €20 million centre of excellence in Athenry.

At Eamon Deacy Park this week the brothers announced that they will be extending their sponsorship agreement with Galway United by two more years.

Since 2013 the Comers have invested roughly €2 million in the running of the Galway football club.

The other major announcement made at this time was that they are providing a 40 acre site at Mountain South, Athenry to develop a centre of excellence for developing young players.

“This will ensure a lasting and fitting legacy of the fantastic relationship the Comers have with our club and provide an environment to ensure a sustainable source of talent for the further growth and development of the club,” a statement from Galway United said.

The Glenamaddy brothers bought the site from the GAA last year for less than €1 million, after the GAA had paid nearly three times that 12 years ago.

Commenting on the facilities announcement Noel Mooney FAI General Manager said “It’s encouraging to hear the progress with Galway United and their development plans for a Centre of excellence in Athenry.

“The FAI Facility Development Department will work alongside Galway United and other stakeholders such as the local authorities to develop a feasibility study on how this proposal can come to fruition.”

“The benefits of a footballing Centre of Excellence in Co. Galway will provide a massive boost to the club and wider community and we look forward to it developing.”

This evening's friendly against Longford will be an important chance to give more of the Tribesmen a chance to play before the new season...
Read more
NEWS

Planning permission is being sought for an overhaul of the Oranmore Community Centre that will include a new all weather spectator stand and external...
Read more
SOCCER

Galway United has confirmed that Stephen Walsh is returning to Eamonn Deacy Park in the club's latest signing announcement.The 30-year old has made over...
Read more
Facebook
Twitter
Pinterest
WhatsApp