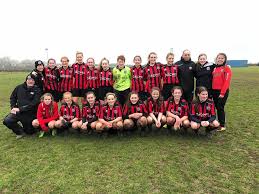 Cregmore/Claregalway FC’s under 18 women’s team are back in the WFAI Cup Final after a comprehensive win over Greencastle FC on Sunday in Cregmore.

Two goals each for Ciara Fogarty and Andrea Trill along with strikes for Aoife Thompson and Sinead Donovan put the Galway team into the decider against Shelbourne FC next month.

Cregmore/Claregalway reached last year’s final going down 6-2 to Peamount United in Eamonn Deacy Park but after defeating Birdhill FC in Novembers quarter-final, they left little doubt about their intentions in this semi-final in front of their home supporters.

The girls played some beautiful football showing the strength of their passing game and working very well as a team unit in all areas of the park. Cregmore led 3-0 at half time with two goals from Fogarty and a fantastic header from Trill finishing a pinpoint cross from Donovan.

Greencastle created some chances but were denied by a couple of fine saves from Karen Connolly in goals along with decisive defending from Cregmore/Claregalway’s back four of Amy Walsh, Aoife Lyons, Claire Conry and Emma Conacur.

After the break, the CCFC girls pushed on, controlling the play in the centre and down the wings through Caitlin Quinn, Donovan and Eve McDaid and netted three more goals from Trill, Aoife Thompson and Donovan.

Overall, a fantastic performance that was contributed to by the subs Angie Dempsey, Deirdre Walsh, Shauna Brennan, Chilline Trill, Hannah Hession coming on during the second half as well as Katelynn Roche and Saoirse Healy who did not get a run out.

Shelbourne, who beat title holders Peamount United on their way, came out 6-3 winners in Cork against Lakewood Athletic.

The 2018 WFAI Under 18 Cup Final between Cregmore/Claregalway FC and Shelbourne will take place on Sunday, March 25th.

A reminder has been issued to registered sports clubs that the closing date to apply for funding under the Texaco Support for Sport is...
Read more
NEWS

The chairman of Ballinasloe Town AFC is celebrating after being named an Inspirational Hero at the Gala Retail and Virgin Media Inspiration Awards.Joseph Kelly,...
Read more
SPORT

More than 100 sports clubs around Galway City and County have been awarded over €125,000 in funding through the Local Sports Partnership Small Grant Scheme.The...
Read more
Facebook
Twitter
Pinterest
WhatsApp

When picking a family home to settle down in long term, some of the most sought after features in a house are lots of...
Read more
Load more