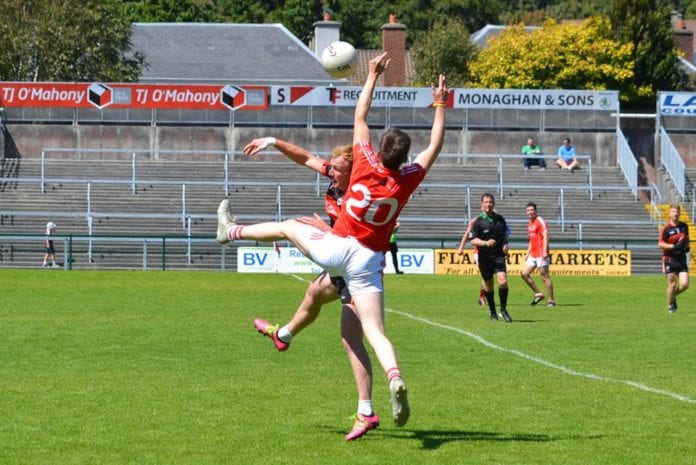 Corofin, Mountbellew/Moylough and Monivea/Abbey moved within touching distance of the Galway Senior Football Championship quarter-finals when they picked up their second wins.

Annaghdown and Killannin also maintained their unbeaten positions after sharing the spoils while St. James’ and Moycullen won their opening fixtures.

With only two qualifying from each of the four groups of five teams, Claregalway, Cortoon Shamrocks, Caltra and St. Michael’s look almost out of contention and will focus on avoiding the relegation play-offs

Corofin are 30 domestic games unbeaten after they obliterated Cortoon Shamrocks 5-16 to 0-6 in Tuam Stadium thanks to goals for Ronan Steede, Dylan Canney, Martin Farragher and a Gary Sice brace.  Kevin O’Brien’s side made a quarter-final place a near certainty with their second performance bringing them to 29 wins and one draw since 2013.

St. James’ were 4-14 to 1-14 winners over Claregalway in Tuam.  Fintan Cooney got two goals but Claregalway led 1-8 to 2-4 at half-time thanks to Danny Cummins’ strike.  But two more majors including an Eoghan Concannon goal ensured the ‘Jimmies’ a nine-point victory.

Tuam Stars got their first win of 2018 when they beat Barne 3-16 to 0-19 in Pearse Stadium.  Jamie Murphy, Noel Henry and Shane Gaffney got the goals as they bounced back from their heavy defeat to Annaghdown the first day.

Annaghdown were denied a second win thanks to two late Killannin points who drew for the second time.  Ryan Forde and Frankie Burke got first half Annaghdown goals and the latter looked to have sealed the win in injury time.  But a broken wrist for Annaghdown’s Ciaran Duggan has ruled him out of Galway’s Super 8 campaign.

Mountbellew/Moylough stayed on maximum points with a dominant 4-17 to 1-5 victory over Killererin in Tuam Stadium.  And Kilconly won a cracking tie giving points in a 1-17 to 3-9 win over Naomh Anna, Leitir Moir in Pearse Stadium.

Monivea Abbey got an eight-point head start as they took the spoils in Tuam Stadium.  Their second win was secured when they finished 0-15 to 0-10 ahead of Caltra.  And Moycullen began their campaign with a comprehensive 3-15 to 2-5 win over St. Michael’s.