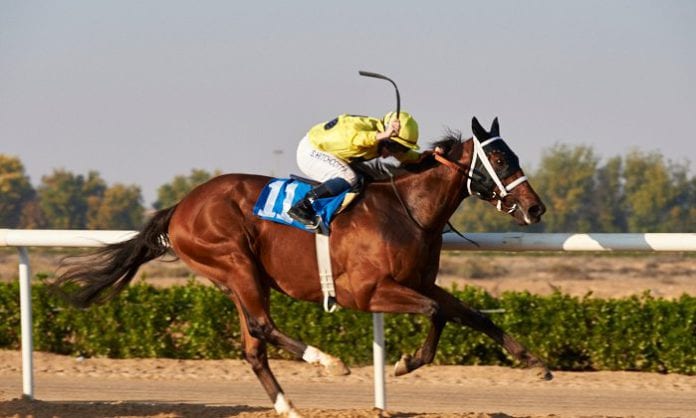 Willie Mullins maintained his stranglehold on the 2018 Galway Races as Sharjah came out from the pack to take the Guinness Galway Hurdle on Thursday (2nd August).

It was his third winner of the day to take the €300,000 prize at 12/1 on Patrick Mullins.  Earlier, Minella Beau delivered in the opening race with Ruby Walsh.  And Calie du Mesnil was successful in the Novice Hurdle at 4pm through Danny Mullins before Patrick Mullins brought home Sharjah.

The weather proved difficult for many horses but also was a challenge in the Ladies Day competitions before the winners were announced.  Charlene Byers from Co. Down was the winner of the ‘Best Dressed’ Competition while Kilkenny’s Moira O’Toole won the ‘Best Hat.’

Winner of Best Dressed Lady at Galway Races is Charlene Byers from Newry Co Down and winner of Best Hat is Moira O’Toole from Kilkenny @rtenews #GalwayRaces #bestdressed pic.twitter.com/tOM9WA4hs6

Billy Lee also enjoyed his own double as he rode John Joseph Hanlon’s Camlann to glory in the penultimate race. And You Raised Me Up took the spoils in the final race.

Our luck didn’t return as only one winner came in for the Galway Daily Tipsters after kicking off with a one-two in the first race through Minella Beau and second placed Caltax.

The fifth day sees action returns to the evening (Friday) with racing beginning at 5.10pm with seven races and the last starting at 8.25pm.

GALWAY RACES: You Raised Me Up Has a Good Time https://t.co/LN130Rp6KS