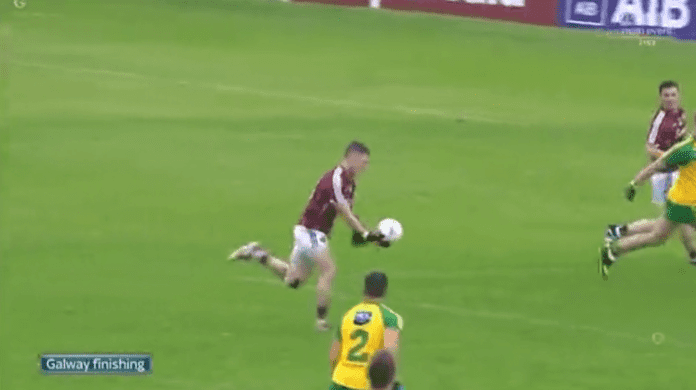 Galway march on to the Quarter Finals in Croke Park after demolishing Doneagal by an impressive 15  points, winning by 4-17 to 0-14.

A ruthless display from the Tribesmen – coupled with a poor Donegal performance especially in the first-half- left Galway leading by eleven points at half-time with three first-half goals.

While the sun shone in Galway, the rain began to pour down in the second half in Sligo, and Galway continued to pour forward with two points in quick succession after the restart.

The wind favoured Donegal in the second half, and they showed some signs of improvement from the disastrous first-half.

Three black cards , two for Donegal and one for Galway, were followed by a red card for Galway’s Declan Kyne, but the change in numbers didn’t phase Galway who ran out comfortable winners.

Great double save by Bernard Power from Patrick McBrearty’s penalty and rebound kept Galway out of sight just before the hour-mark.

Eamon Brannigan ended a thirteen minute period without a score for Galway with ten minutes to go and Michael Meehan came on for Damien Comer with three minutes to play – his first appearance since 2013.

Man of the match, Johnny Heaney,  said that it was tough after the Connacht Final defeat but that they “dug deep and came out the better side today.”

“We knew we needed to step it up again and thankfully we did, and if it wasn’t for the lads giving me the easy hand-passes across the goal, I wouldn’t have got them so, a lot of work from the lads,” Heaney added.