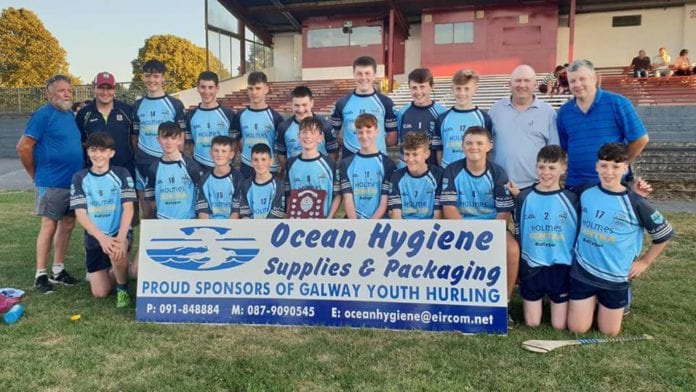 Ballygar delivered a dominant display to take county silverware in Ballinasloe as they led from start to finish in this under 16 B Hurling Shield Final.

Ballygar led 0-3 to 0-0 inside seven minutes thanks to Evan and Ryan Duffy, and Eammon Trayers before Conor Slattery opened Tommy Larkins’ account.  And after Ballygar’s Greg Thomas and Larkins’ Augustine Lyons traded minors, two more Thomas frees made it 0-6 to 0-2 on 13 minutes.

It was an entertaining final played and the Woodford/Ballinakill team played their part in keeping it competitive in the opening 30 minutes.  Keith Dervan and Slattery tallied placed balls to reduce arrears to two but 1-3 unanswered from the north Galway team was significant.

Evan Duffy made it 0-7 to 0-4 on 19 minutes but after Quinn’s dangerous ball from the right four minutes later, the alert Calligy got the touch for Ballygar’s first goal.  Further points for Thomas and Evan Duffy left it 1-9 to 0-4 at half-time.

Ballygar seized the initiative and Evan Duffy also threatened goal before the break.  But they put their lead to double digits five minutes after the restart when Quinn got his first three-pointer.

Dervan hit back for Tommy Larkins but they struggled to open any routes back.  Trayers and Ryan Duffy both troubled the umpires by the 42nd minute to make it 2-11 to 0-5.

It was certain that Liam Hanley’s team needed goals and they got a break when O’Hehir capitalised on a moment of defensive uncertainty following Lyons’ delivery for their first goal.

But Ballygar’s character shone through as they replied with two Thomas frees by the 50th minute.

Dervan did send a Tommy Larkins free to the net seven minutes from time giving them a glimmer of hope.  But it proved to be their final score as Ballygar finished with 2-4 without reply.

Trayers pointed before Evan Duffy finally got his goal on 54 minutes.  And after Ryan Duffy added a point, Quinn’s second goal was the icing on the cake.