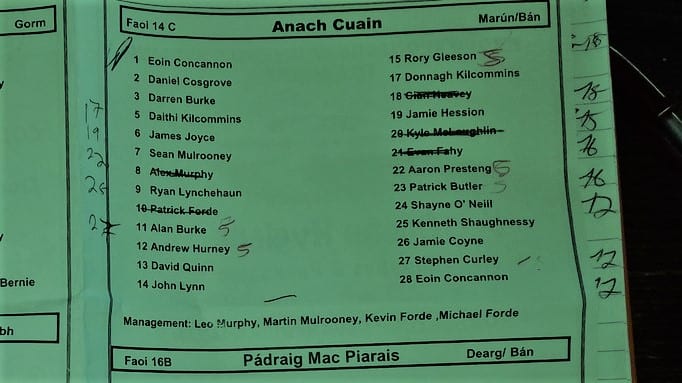 Despite a poor start conceding two early goals, Annaghdown came back to take the county title at the second time of asking with a man of the match performance from Daithi Kilcommins.

Kilcommins was the Galway side’s scorer-in-chief but after striking a second major in the opening minute of the second half, he reverted to a sweeper role to ensure Padraig Pearses were never given another chance.

The Roscommon team were hoping for better fortune on their return to Ballinasloe having lost their Feile final in June.  And they got off to the perfect start when they stormed into a 2-0 to 0-1 lead in five minutes.

Their twin threats up front made a name for themselves on the national stage and continued that trend.  After Kilcommins had opened for Annaghdown, Charlie Mooney finished to the net on four minutes to give Pearses the lead.

And it looked like this replay would be a cause for celebration for the club based just four miles outside the town when Sean Canning, nephew of Joe, got the second major to put five between them.

Annaghdown hadn’t settled but started to play their way back.  Kilcommins converted a free and they nearly got a major when Kenneth Shaughnessy’s run was denied for a 65.

Kilcommins added two more scores and in the 14th minute, Leo Murphy’s team seized an advantage they never surrendered as Kilcommins finished to the net.

Mooney responded with a Pearses free but they struggled to create chances and another Kilcommins score gave Annaghdown a 1-5 to 2-1 interval lead.

And their hold on this final strengthened after the restart when Kilcommins got the second goal.  Captain Sean Mulrooney was growing in influence through his raiding runs down the right and he did the work for Kilcommins’ second green flag putting four between them.

As other started stepping up, Annaghdown started tightening up their defensive lines though Kilcommins did set up John Lynn for another point on 24 minutes.

Mooney struck a free but Pearses just couldn’t find a way through though they did nearly reap dividends on 29 minutes when Jack Flynn found Mooney only for the effort to go wide.

Shaughnessy tallied beforehand to make it 2-7 to 2-2 with 12 minutes remaining.  It proved to be the game’s final score but Shaughnessy and Mulrooney did force two top saves from Pearses’ keeper Jack Ryan before the finish.