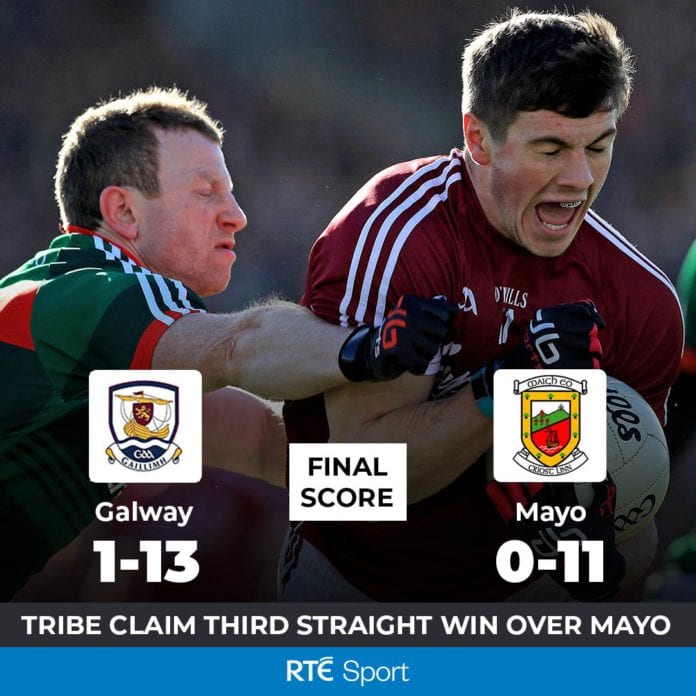 Galway supporters were delighted with their win over Mayo even if the fights were the biggest talking point.  Suspension, Bateing, Bad Blood and Double Standards accompanied good and excellent thoughts on Sunday’s results in Pearse Stadium.

And one follower managed to put things in prospective after proposing to his girlfriend as well.

Here’s our selection of some of the best tweets after Galway’s National Football League victory.

Usually Galway beating Mayo would be my highlight of any weekend.

Mayo v Galway May 13 at last the bite is back ….. big crowd castlebar what more could you want …. time to wake up @austinjpayne @PeterWalsh51 @liamjtpayne @MayoGAA #bordertown #noisyneighbours

Just watched Galway Mayo highlights. O'Connor should get a long suspension for that elbow!! No place in game for that shite!!! #GAA #AllianzLeagues

I thought the Mayo-Galway players were engaging in some competitive performance art… “footing the turf”. Things were boiling over and Conroy dragged O’Shea out lest he got injured. As much as the Dublin media tries to hype it…there isn’t a drop of bad blood out there.

Poor Mayo were bate… Much worse than getting beat. #GALvMAY #Galway #Mayo pic.twitter.com/0sMuzyaaeq

Did you ever see anything like the punch ups in the #GALWAYMAYO match today? If that was #Dublin playing you’d never hear the end of it. Today will be forgotten quickly enough. Talk about double standards!