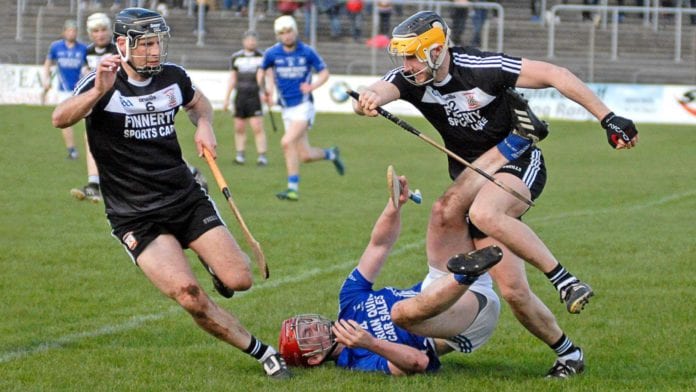 The opening three games in Group 2 of the Senior B Hurling Championship saw Tynagh-Abbey/Duniry and Padraig Pearses emerge with opening day victories while Abbeyknockmoy and Moycullen couldn’t be separated.

Shane Moloney’s late goal gave Tynagh-Abbey/Duniry the spoils in Duggan Park on Saturday after they trailed Athenry for most of the tie.

Athenry led 0-9 to 0-8 at half-time but following a Cian Burke injury, Brendan Lynch’s goal on 36 minutes gave Tynagh-Abbey/Duniry a two-point advantage.  That only lasted a couple of minutes as Cathal Keane got an Athenry major.

Ronan Hardiman and Moloney shared free taking duties but when Hardiman converted on 64 minutes, it looked enough for Athenry.  But Moloney’s goal 60 seconds later followed by a late free gave Tynagh-Abbey/Duniry a 2-14 to 1-14 victory.  (Click Here For Match Report)

Padraig Pearses began with a 0-20 to 0-16 win over Ardrahan in Kenny Park on Saturday.  Jonathan Glynn was back for Ardrahan but they struggled to stay with the Gurteen/Ballymacward team after sharing the first six scores.

Pearses led 0-12 to 0-7 at half-time and stretched that advantage further upon the restart as Tomas Flannery, Emmet Ward and Sean Hardiman put eight points between the teams.

Ardrahan stormed back reducing arrears to the minimum as Jason Kennedy, Ger Forde, Cian Fahy and Maurice Callanan brought it back to 0-16 to 0-15.  However, Cyril Donnell and Jimmy Gelston settled Pearses again as they held on for the win despite Ardrahan blazing a late penalty wide.

Moycullen gave a handful of players their debuts in Pearse Stadium on Saturday but will still be disappointed they let an interval lead slip.

The west Galway side were 1-9 to 0-8 ahead at half-time but Abbeyknockmoy, who lost all five group games in 2017, received a massive boost as they came back with two second half goals to end this game level at 2-14 apiece.