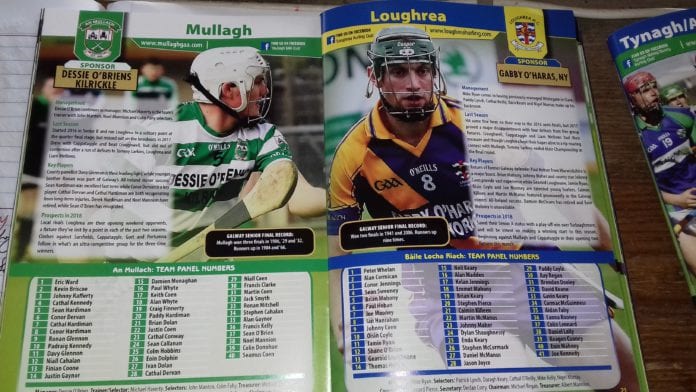 A tight contest eventually went Loughrea’s way on Saturday in a showdown between two clubs who survived Senior A relegation in 2017.  The teams were level nine times before Loughrea outscored their opponents by 0-6 to 0-3 in the final quarter.

Their last two championship meetings saw only one point separate the teams and this latest installment carried the same hallmarks.  Davy Glennon opened for Mullagh on two minutes before Brian Keary equalised.  It was a trend that would carry throughout the opening 30 minutes.

Padraig Kennedy was Mullagh’s free taker and he made it 0-2 to 0-1 before Jamie Ryan opened his account.  The returning Paul Hoban set up Joe Mooney for Loughrea’s third before Finian Coone restored parity on 17 minutes.

Loughrea will be disappointed with 2017 having expected to compete for silverware and they needed to beat a disorientated Turloughmore to preserve their top 12 status.  Hoban’s return from Warwickshire will be a massive boost especially following Damien McClearn’s retirement.

Oisin Coyle, Gearoid Loughnane and Johnny Coen gave Loughrea the lead three times but Mullagh responded through Justin Gaynor, Sean Hardiman and Davy Glennon.  Ronan Glennon put Mullagh ahead but on 35 minutes but Ryan sent the teams to the dressing rooms level with seven points each.

Kennedy scored as Mullagh came out of the blocks. And on 34 minutes, a Conor Dervan delivery was brilliantly caught by Davy Glennon.  Liam Gordon indicated a penalty and Kennedy blasted towards goal only for a fantastic Alan Madden stop.  It was the moment things started shifting Loughrea’s way.

Scores for Keary, Sean Sweeney, Ryan and Mooney left it 0-14 to 0-10 in Loughrea’s favour.  Loughnane added the 15th after Ronan Glennon scored for Mullagh.  But they needed Madden again at his best with two minutes remaining with another quality save from Hardiman.

Ronan Glennon free left just three points between them before another close range free saw Hardiman denied by a resolute Loughrea defence.  Mullagh refused to lie down and will need that determination to avoid the play-offs again.  Thirteen overall wides will be a cause for concern for Loughrea ahead of their next game against Cappataggle.