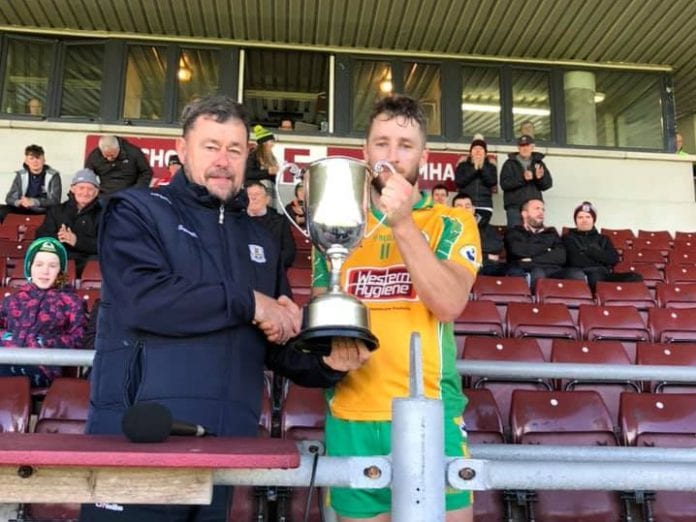 Conor Kelly and Barry Goldrick were among the goal scorers as Claregalway secured their senior status for 2019 on Saturday in Clonbur.  Billed as a shoot-out for third place in Group One, the 2017 intermediate champions got the goals and An Cheathru Rua will need to survive a relegation play-off.

Corofin didn’t even wait for the County Final this year to pick up their first trophy after a championship match.  However, the Frank Fox Cup is still up for grabs but the defending champions did prevail in this top of the table clash that doubled as the 2017 league final.

Annaghdown ensured there was no doubt about their position in Group 2 as they were six-point winners over Barna on Saturday.  The result ensured them top spot and seeded status for the quarter-finals where they drew St. James.

A point gained in their opening match and this one-point victory saw Salthill/Knocknacarra grab a quarter-final place on Sunday and send the longest running top flight club towards the relegation battle.  Salthill/Knocknacarra’s opening day come back against Killannin proved critical.

Mountbellew/Moylough became one of just three teams to finish with maximum points after this goal fest on Saturday in Moycullen.  Eoin Finnerty scored 2-3, Colin Ryan got 2-2 and Paul Donnellan struck 1-2 as the locals took note.  Mountbellew/Moylough meet Moycullen next.

Caherlistrane marched into the quarter-finals on Sunday with this impressive result over Kilconly in Tuam Stadium.  In another tight group, they edged ahead of Killererin to take the runners-up spot but their prize for qualification is a showdown against Corofin.

Milltown concluded their impressive Group Four campaign on Saturday to take their place in the quarter-finals as group winners.  And the north Galway team can look forward to a showdown with Salthill/Knocknacarra.

Billed as the game of the weekend, these rivals couldn’t be separated as they finished all square in Pearse Stadium.  The result sees Moycullen (+25) advance on scoring difference putting last year’s semi-finalists Monivea/Abbey (+8) out of the championship.

The Quarter Final Draw is….

The senior championship quarter-finals will take place over the next two weekends (September 30th and October 7th).  The semi-finals will be Sunday, 14th October with the final taking place two weeks later (28th October).

The county champions take on the Roscommon or London holders in the Connacht semi-final on Sunday, 11th November.

The fourth placed teams will play their relegation play-offs next weekend (30th September) before the round-robin series begins on October 6th.  The bottom teams from the two groups of three will play intermediate in 2019.

The group winners maintain their senior status with the two second placed sides participating in a final play-off on October Bank Holiday Weekend (27th – 29th October) to decide the third team to be demoted.