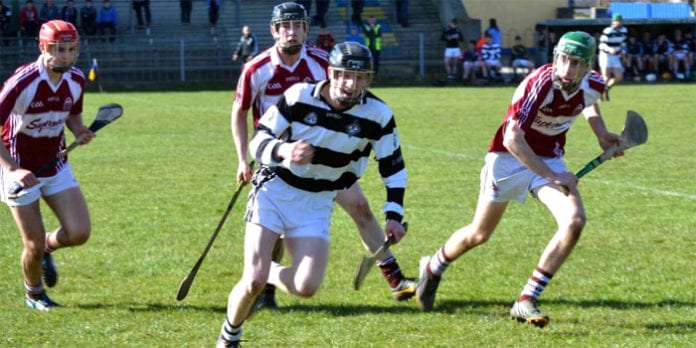 After saving the game from 12 points down in normal time, Presentation Athenry had nothing left in the tank as St. Kieran’s College, Kilkenny clinched a fourth All-Ireland title in five years.

But after the teams shared the first four scores, St. Kieran’s got control again as Jamie Young’s goal helped the Kilkenny school go five clear at the extra-time break before Ciaran Brennan got the winning three-pointer on 74 minutes.

TJ Brennan pointed for Athenry from the restart but St. Kieran’s looked to continue in cruise control as Barron, Mullen and Kelly made it 3-10 to 0-7 on 34 minutes.

Athenry were pulling players back trying to curtail Kieran’s dominance and the Kilkenny team did have two more goal chances with Eoin Lawless denying Kelly the pick of the stops.

Two Kennedy frees reduced arrears before Brett got this first white flag and Eoin Caulfield saw his effort just shade over the crossbar to leave it 3-10 to 0-11 on 48 minutes.

But they looked to be no more than consolation efforts as two Mullen outscored a Conor Walsh Athenry point making it 3-12 to 0-12 with six minutes remaining.

But two Brett goals either side of a Kennedy major delivered a stunning recovery and forced another 20 minutes of action in Semple Stadium.

TJ Brennan added two Athenry points after the resumption either side of minors for Mullen and Ian Walsh.  But by the switch of ends, St. Kieran’s were 4-16 to 3-14 ahead.

Young’s goal on 69 minutes finally settled the Leinster champions who’d been rattled by Athenry’s comeback but scores for Mullen and a Kelly ’65 gave them a margin.

Kelly added two more in the second period before Kennedy arrested Athenry’s slide on 73 minutes leaving six between them.

But any hopes of another rally from the Connacht champions were ended when Ciaran Brennan made an impact striking 1-1 in two minutes to ensure there was only one winner.

Ian McGlynn and Kennedy got consolation points for Presentation but their efforts ended in vain.  They played their part in a classic final but that proved immaterial at the finish as the wait for a first title must wait another year.