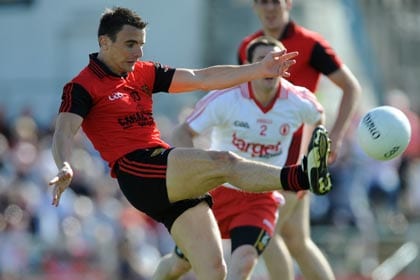 Former Down footballer Danny Hughes believes Galway are genuine contenders in the All-Ireland Football Championship race after their league final performance against Dublin on Sunday.

Writing in his column in the Irish News, he said “Galway will have gained so much from the game.

“For a start, they were very competitive throughout and can look back at key moments and perhaps take solace from the fact it was a game they could have won.

“Defensively, Galway reduced Dublin to a couple of goal chances and, given the Dubs’ forward line, I count that as a big success.

“Offensively, from a Galway perspective this was not the dour encounter foretold in some quarters since the League started in January.

“The general attitude southern media and pundits hold toward ‘Northern’ teams, in particular any individual from Tyrone, never really surprises me.

“When Galway decided to employ the services of Paddy Tally, suddenly defending properly was a crime. It was, as one pundit called it, ‘ugly’.

“While the Cavan v Roscommon game was exciting to watch, it played out like a minor game in comparison to the Galway-Dublin match.

“Apparent in what I have seen of Galway this year, in particular in the League final, was their ability to defend effectively, skilfully and get the balance right between defending and attacking.

“Galway are a work in progress.

“They provide a serious threat to the equilibrium of things in Connacht.

“Given Galway’s League form, I am very confident they will make the ‘Super Eights’.

“Even if Galway don’t win a Connacht title, with Tally’s involvement and experience, I see them as real contenders for the All-Ireland.”

Galway begin their Connacht Championship campaign against Mayo on Sunday, 13th May in MacHale Park, Castlebar.

"One of the sole reasons we started to compete at the top level" Former Down footballer Danny Hughes says Galway are reaping the rewards from the appointment of Paddy Tally to their coaching staff pic.twitter.com/of7REOTKNh