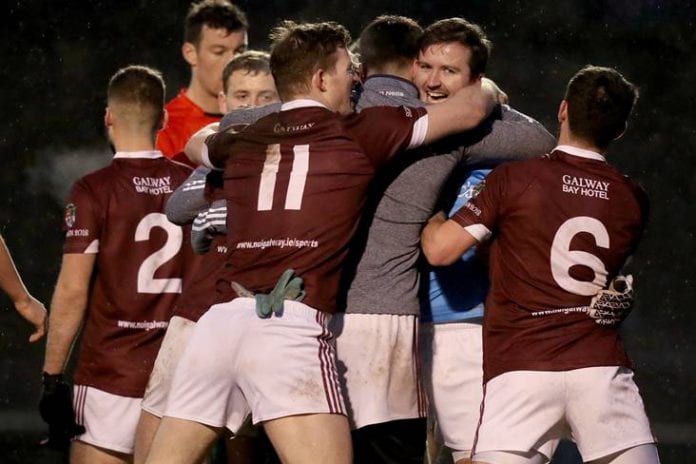 NUI Galway go in search of a 23rd Sigerson Cup title this Saturday when they face rivals UCD for the ultimate prize in college football.

Both teams came through their respective semi-finals on Wednesday night.  Goals for Sean Kelly and Eoin Finnerty put NUIG to the front as Maurice Sheridan’s team emerged 2-12 to 0-15 winners over DIT.

And with Dublin star Con O’Callaghan in the fold, UCD reached their third consecutive decider needing two periods of extra-time to beat Ulster University 0-18 to 1-13 in Inniskeen.

There’s Galway involvement on both sides.  County seniors Sean Mulkerrin, Peter Cooke and captain Damien Comer are central to the NUIG cause as they seek a first win since 2003.  Sligo defender Gerard O’Kelly-Lynch and Limerick’s Adam Gallagher are also prominent figures.

The latter duo will feature in this final despite Kerry’s rescheduled National Football League tie with Monaghan taking place on Sunday.  But two Galway players, on both teams, don’t have that choice as this final clashes directly with another significant contest.

Corofin duo Kieran Molloy (NUIG) and Liam Silke (UCD) both came off the bench for their respective colleges and scored in the semi-finals.  But the club has a crucial All-Ireland senior semi-final taking place also on Saturday as the Galway champions tackle Kildare’s Moorefield at 2pm in Tullamore.

Whatever about the Kerry clash, both Corofin and the Sigerson Finals were always marked for the same weekend which is a shocking clash that should have been avoided.

However, NUIG will have to get on with it against the one side that have won this competition more (33 times).  But even though it’s 15 years since their last victory, UCD were NUIG’s victims when Michael Meehan scored 1-4 in a 1-8 to 0-8 victory in Pairc Ui Rinn.

Mulkerrin and O’Kelly-Lynch will lead the resistance against UCD’s dangerous attack while Comer, Enda Tierney, Adam Gallagher and Kelly will look to make inroads the other end.

But the midfield battle could decide this final when NUIG pair Cein D’Arcy and Cooke go up against O’Sullivan and Barry.

Galway teams always fare better as underdogs but they face an experienced set-up.  Throw O’Callaghan into the mix and the challenge increases.  NUIG will need Comer to have the same influence the other end to deliver a historic victory.  They can do it but understandably, UCD gets the nod.