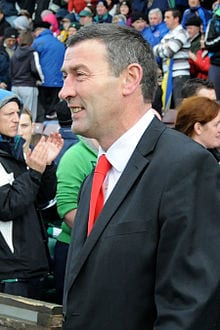 Galway’s All-Ireland winning midfielder Michael Coleman is among 15 players from the 1990s who’ll be honoured at this Sunday’s (19th August) All-Ireland Hurling Final.

As the Kilkenny team from 1992 and 1993 received their silver jubilee acknowledgements in 2017, the GAA are going with something different this year remembering great players from that decade.

As part of the on-field entertainment on All-Ireland final Sunday, this year the GAA will salute the star hurlers of the 1990s in recognition of a decade of hurling which did so much to elevate the game to new heights and popularity.

Coleman made his championship debut in 1988, the last time that Galway won the two-in-a-row and remained a powerful presence at midfield for nearly a decade, during which he won two All-Stars.

As well as Liam MacCarthy Cups for Cork, Tipperary and Kilkenny, the 1990s were known for the resurgence of other counties as Offaly, Clare and Wexford delivered stunning memories.

Offaly came back from five points down with as many minutes remaining in 1994; Clare won a first All-Ireland in 81 years in 1995; and Wexford were ‘dancing at the crossroads’ in 1996 when they bridged a 28-year gap.

And that’s not forgetting Offaly’s golden summer in 1998 when after a managerial change, and a sit-down protest following their semi-final replay with Clare being blown up two minutes early, they became the first county to win the All-Ireland senior hurling championship through the back door.

The players will be guests of the GAA on Sunday and will be presented to the crowd in between the minor and senior finals.

Galway face Limerick in the 2018 All-Ireland Senior Hurling Final on Sunday, 19th August.  Throw-in at Croke Park is 3.30pm and will be proceeded by the minor final at 1pm between Galway and Kilkenny.