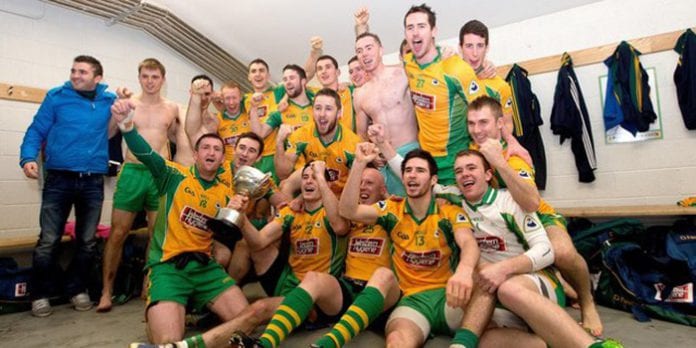 Corofin are into the All-Ireland Senior Club Football Final on St. Patrick’s Day in Croke Park after beating Kildare champions Moorefield in Tullamore on Saturday.

Liam Silke was the hero for the Galway champions striking a 59th minute winning goal just as Moorefield looked like they were turning the screw.

Kevin O’Brien’s crew had to do it the hard way after a shocking decision to red card Martin Farragher in the opening minute after an altercation with Moorefield full back Liam Healy.

But despite going into their shell in the opening 30 minutes to withstand any potential onslaught from their opponents, Corofin opened up in stages after the restart even if they could have made it easier for themselves.

Farragher’s sending off was the main talking point after the opening tussle for possession.  Referee Derek O’Mahoney adjudged him to have hit Healy with the knee when it was clear he was only trying to get off the player after being pushed by another Moorefield player.

The opening score came on 13 minutes when Jason Leonard kicked over from the left.  But within 60 seconds, David Whyte replied for Moorefield.  And when Gary Sice pointed from a free on 20 minutes, Eanna O’Connor did likewise to send the teams in 0-2 apiece at half-time.

What this contest lacked in quality or as a spectacle, it made up for it in excitement and Corofin did show a more attacking element even if they didn’t abandon their basic structures.

Micheal Lundy and Ian Burke did have goal chances in either half to make like easier but they did go three points clear by the 36th minute as Sice, Burke and Ronan Steed made it 0-5 to 0-2.

Corofin were missing chances and Moorefield, despite failing to use their numerical advantage efficiently, only started getting into the game when their own Adam Tyrell was black carded.

O’Connor and Aaron Mullins hit two inside a minute before James Murray, who blocked numerous Corofin chances, popped up from a wing back position to level at 0-5 apiece with 10 minutes remaining.

Sice restored Corofin’s lead before Cian O’Connor looked set to force extra-time on 55 minutes.  But even though he was denied one All-Ireland appearance today with UCD, Silke wouldn’t be denied another getting the winning goal before four minutes of injury time.

Burke received a black card in the added time but it didn’t matter as Corofin booked a meeting with Nemo Rangers or Slaughtneil in the decider.  Kieran Fitzgerald, Sice, Burke and Steed were their top performers.

Patrick Ward wrote in Kildare now – “14-man Corofin showed superb defensive nous and experience of the highest order to seal their place in the All-Ireland final against either Nemo Rangers or Slaughtneil.”