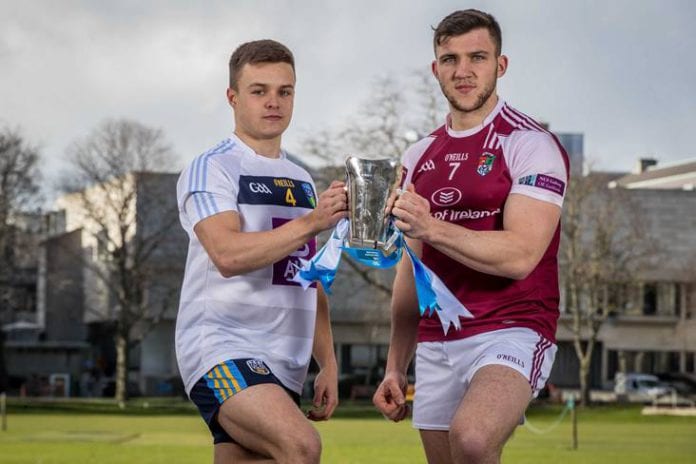 It’s all square at half-time in the Sigerson Cup Final in Santry Sportsgrounds on Saturday as late scores from Damien Comer and Enda Tierney have brought NUI Galway back on level terms.

The Connacht outfit made the better start going four points clear in the opening quarter but a Conor McCarthy goal brought UCD back into the contests.

McCarthy has been UCD’s key player with the Monaghan man kicking 1-3 in the opening 30 minutes and they also came close to a goal before half-time when Con O’Callaghan drilled a 13 metre free wide.

That being said, NUIG have also had major opportunities as Tierney forced a save from Charlie Manton while Comer also hit the post.

Tierney and an Adam Gallagher free gave Maurice Sheridan’s team a 0-2 to 0-0 lead before McCarthy got off the mark on seven minutes.

But NUIG were on the ascendancy as Tierney was rewarded with a white flag following Manton’s deflected save before Comer and Gallagher made it 0-5 to 0-1 entering the second quarter.

Comer had his chance denied by the woodwork and straight up the other end, McCarthy made no mistake hitting the net on 19 minutes reducing arrears to the minimum.

NUIG got the next point through Comer two minutes later going 0-6 to 1-1 ahead but the next four scores went the way of UCD.  McCarthy got the first two to level affairs before Eoin Lowy and Evan O’Carroll gave John Divilly’s team the initiative.

The Galway college had to dig deep as Comer and Tierney got the equalising points.  Rumours began circulating that Corofin’s Kieran Molloy is on his way and it’ll be interesting to see if he surfaces in the second half.  Will his club’s match winner Liam Silke show up for UCD?