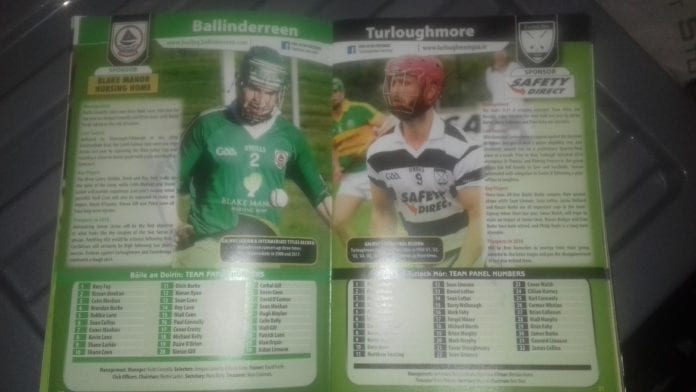 In a tight encounter, Turloughmore just done enough to defeat Ballinderreen in Group One of the Senior B Hurling Championship.

Joe Hession’s side took the lead with five unanswered points from Daniel Loftus, Barry McDonagh, Sean Loftus, Jamie Holland and Daithi Burke to have Turloughmore leading 0-7 to 0-4 at the break.

Turloughmore suffered a huge blow after the break with Daithi Burke forced off through an eye injury. Holland and Kevin Lane traded scores early on in the second half.

The 2017 Intermediate champions raised a green flag with David O’Connor sending a cross field ball to Oisin Burke who placed the sliotar into the bottom corner and a further Kevin Lane placed ball had the sides deadlocked at 1-6 to 0-9 after 41 minutes.

Galway senior star Sean Loftus was tremendous all day and pointed another long-range point on 45 minutes. Last year’s Galway under 17 star Niall Coen was fouled in the small square and Ballinderreen were awarded a penalty up stepped Kevin Lane but his shot was saved terrifically by Paul Dullaghan.