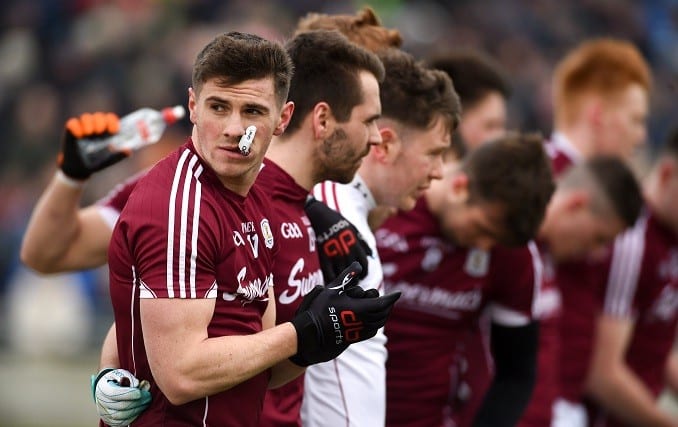 Shadow boxing perhaps but Galway and Dublin set up their league final on Sunday after Johnny Heaney struck the equalising score in the eighth minute of added time.

Tempers heated in the closing stages, both teams had a black card and Eoghan O’Gara was sent off for Dublin.  But they wetted the anticipation before they clash again in Croke Park on Easter Sunday (April 1st).

"Filthy Galway" 🙄 you'd swear Dublin are angels the way they go on about themselves pic.twitter.com/p391FcCcmq

The draw confirmed Dublin’s spot in the decider after Galway booked their place last week.  Both teams were expected to make changes to their regular outfits but the desire to win wasn’t lacking from either camp.

The All-Ireland champions took an early lead against the elements as Ciaran Kilkenny and Dean Rock made it 0-2 to 0-0 on five minutes.  But when Paddy Andrews registered Dublin’s third white flag, Galway had hit the front with five unanswered scores.

Barry McHugh (2), Adrian Varley, Shane Walsh and Peter Cooke put the Tribesmen ahead.  And after Andrews tallied, McHugh (2) and Gary O’Donnell created an 0-8 to 0-3 cushion.  Kilkenny responded but McHugh and Cooke put six between them before Kilkenny’s third left the interval deficit at 0-10 to 0-5.

It could have been better as McHugh and Varley missed two golden chances.  But Dublin, despite not starting keeper Stephen Cluxton, had plenty of possession and were expected to make a comeback.

Rock and Kilkenny did the double again within seven minutes of the restart but they had to wait until the 54th minute for Jonny Cooper to reduce arrears to 0-10 to 0-8.  And Dublin were without Rock after he was black carded.

Paddy Small converted a free but Damien Comer (a substitute) and Heaney gave Galway a 0-12 to 0-9 lead with nine minutes remaining.  However, despite O’Gara seeing the line, Conor McHugh and Cormac Costello scored from placed balls before Kilkenny levelled affairs on 72 minutes.

Full Time here in Pearse Stadium and it's ended a draw. What a bleeding ending, it looked like we were beaten but these lads never know when they're beaten. Filthy game with Joe McQuillan an absolute disgrace again. More to follow….

Time was running out and scuffles delayed matters but with the very last kick, Heaney fired over the equalising Galway point to ensure they didn’t leave empty handed.  But Dublin’s draw confirmed these two will meet again.

It was the second successive draw between the counties even though they hadn’t met since 2011.  O’Donnell, Paul Conroy and Gareth Bradshaw were the only Galway survivors but all will be involved when they renew hostilities in two weeks.

Dublin haven’t beaten Galway since 2001 and if the Tribesmen hold that intact after the next day, they will be league champions.  But both sides have one outstanding round-robin tie before their focus turns to the National Football League Final.

Galway face Kildare next Sunday (March 25th) in their final Division One group game.  Throw-in at Newbridge is 3pm.

#AllianzLeagues Division 1 Football Table after all of this weekend's Round 6 fixtures.

Galway and Dublin qualify for the final. Comhghairdeas.