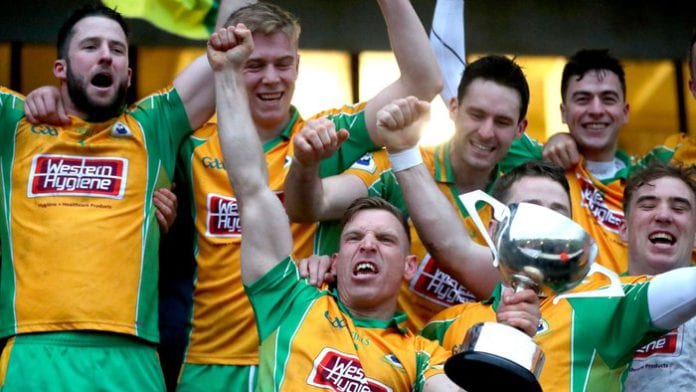 Corofin are the All-Ireland Senior Club Football Champions after a comprehensive victory over Nemo Rangers in Croke Park today.

First half goals from Gary Sice and Michael Farragher put the Galway champions in the driving seat as they continued stretching the margin after the break.

Sice opened on four minutes but was on hand three minutes later for the first goal as Corofin went 1-1 to 0-0 clear.  Luke Connolly responded with a 10th minute Nemo Rangers free but that was as close as the Cork champions got.

Five scores in seven minutes put distance between the teams as Jason Leonard, Dylan Wall, Martin Farragher, Micheal Lundy and Sice made it 1-6 to 0-1.  But when Michael Farragher finished a move the full length of the field on 19 minutes for the second goal, Corofin had one hand on the trophy.

Nemo Rangers finished the half strongly outscoring Corofin by 0-4 to 0-3.  Paddy Gumley, Paul Kerrigan and Connolly (2) troubled the umpires but with Martin Farragher, Sice and Daithi Burke on target, Corofin led 2-9 to 0-5 at half-time.

There were no signs of easing up when play recommenced as Martin Farragher added two points on his way to the man of the match award to bring the margin to 12 points.

Nemo Rangers were missing chances and unsuccessfully chasing goals.  Connolly kicked two points by the three-quarter mark but Dylan Wall, Michael and Martin Farragher left it 2-14 to 0-7 with 15 minutes remaining.

The Cork side were barely raising a cheer as Jack Donovan, Ciaran O’Shea and Connolly brought them to double figures by the finish.  But Sice, Martin Farragher, Daithi Burke and Ian Burke (2) gave Corofin the biggest All-Ireland final win since Nemo Rangers beat Mayo’s Garrymore 6-11 to 1-8 in 1982.

Even before Andy gets to the dressing room @CorofinGAA Liam Silke shares the joy with Fionn and Aaron pic.twitter.com/qPKD9oUg6w

After All-Ireland wins in 1998 and 2015, Corofin maintained their 100% record in Croke Park and regained the Andy Merrigan Cup for the third time.